For years, Joseph Makkos salvaged letterpresses and boxes of rare type from local print shops. He was trawling through Craigslist one day in 2013 when he came upon an ad for a “historic newspaper collection.” Hours later, he had become the proud owner of a Times-Picayune archive from 1885 up to 1930, a collection carefully preserved in some 30,000 airtight tubes.

The trove had originally been part of the newspaper holdings of the British Library. This once vast archive of newspapers from throughout the world was scattered and largely pulped in the late 1990’s, a tragic story that features prominently in Double Fold, Nicholson Baker’s book decrying the routine destruction of original newsprint and old books. Inspired by other print conservation efforts, Makkos launched New Orleans DNA to not only preserve his newspapers but also nurture an appreciation for their true pricelessness. 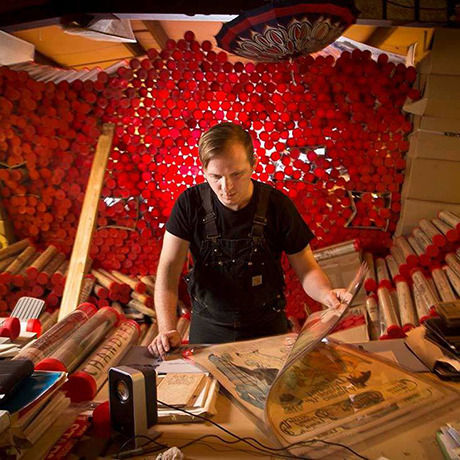 Joseph S. Makkos is the Founder and CEO of NOLA DNA LLC., a business dedicated to the digital archiving and preservation of historic printed material. With this company he manages and curates a collection of some 30,000 historic New Orleans newspapers. The project has recently been covered by The Atlantic, The Columbia Journalism Review, Collector’s Weekly, a number of local newspapers and publications, and most recently in a radio feature on KCRW out of Los Angeles entitled “The Oracle”.

He lives in New Orleans where he actively salvages letterpress-printing equipment from defunct print shops. Utilizing this collection he is commissioned to perform all parts of custom publishing projects that incorporate multi-process printing to produce artful, small-run editions. Prior to moving to New Orleans he lived in Cleveland where he co-founded the independent performance space and micro publishing house The Language Foundry for local and touring poets and musicians. During that time he published broadsides, audio works, and books for local writers and artists, one of which, Hotel Poem - a collection of photographs of poets on film by Charlotte Mann, was chosen as “Book of the Year” by the Cleveland Scene Magazine. His most recent academic position was as a graduate-level writing instructor for the Center for Global Education and Law School at Tulane University. For the five years prior he served as a member of the English department faculty at Delgado Community College, instructing all levels of English Composition as well as courses in American Literature and Creative Writing.

He has studied abroad in Oxford, England, Madrid, Spain and in Merano, Italy at the Brunnenburg Ezra Pound Center for Literature. He holds an MFA in Creative Writing from the University of New Orleans and a BA in Literature from the University of Massachusetts-Amherst. He is currently a Master of Preservation Studies candidate at the Tulane School of Architecture where he assists with the development of the New Orleans Preservation Timeline Project