C is for Collaboration

Alexandra Bowmar Getting From Zoomed Out to Zoned In

Jay Grandin & Leah Nelson discuss how they collaborate with each other as partners in life and partners in business.

Jay Grandin and Leah Nelson run Giant Ant, a creative studio in Vancouver. Specializing in animation and documentary, Giant Ant has slowly worked its way to being one of the top studios in Canada, with clients like TOMS Shoes, Target, and Facebook—and recognition from the likes of the Clios and ADC awards.

They’re also married. And have newborn twins. If there is one thing these business, life and parenting partners know… it’s how to collaborate. 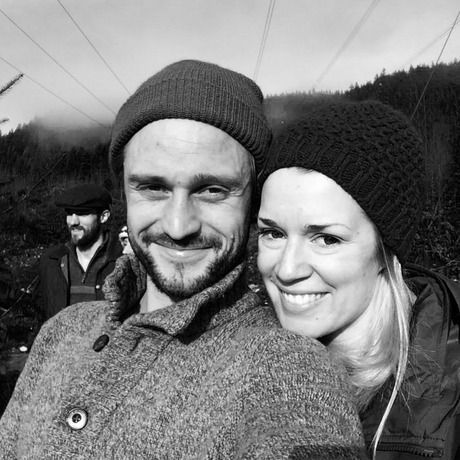 Jay Grandin and Leah Nelson run Giant Ant, a creative studio in Vancouver. Specializing in animation and documentary, Giant Ant has slowly worked its way to being one of the top studios in Canada, with clients like TOMS Shoes, Target, and Facebook—and recognition from the likes of the Clios and ADC awards.

They’re also married. And have newborn twins. If there is one thing these business, life and parenting partners know… it’s how to collaborate.

Jay and Leah met in 2004 at Emily Carr University and subsequently, in 2006, created an accidental “viral video” about showering. Shortly afterward, they were hired by MySpace, when MySpace was still a thing, and they took off hitchhiking across Europe to make a very mediocre web series.

This exhilarating mediocrity sparked a passion in them both and, upon returning from their adventures, they moved in with Leah’s parents to start a small video production company called Giant Ant. Seven years on, Giant Ant has grown to a family of 15 passionate storytellers, and they couldn’t be prouder of their wonderful team.

Leah: I think creativity is the chemical that your brain releases when the answer to a question or problem does not immediately present itself.

Jay: Creativity to me feels like an exercise in applied curiosity. The people that seem the most creative to me are the ones who ask the best questions. I want to be like that.

Leah: Other people’s stuff. Anyone in a creative field that says this isn’t true is lying. Everything around us has been designed, thought about and created by someone, so whether it’s well executed or not, you think, “damn that’s good, I want to do that” or “I’m going to try to do that better”. Either way, it inspires action.

What’s the one creative advice or tip you wish you’d known as a young person? Leah: Fail fast and often.

Leah: Having twins. Like, literally giving birth to them. It was caaaraaaazy. Jay: Running an ultramarathon in the icelandic wilderness. And starting a creative services company.

What did you learn from your most memorable creative failure?

Leah: Creative failures are usually small and happen constantly. Too many to mention. But you bank them, adjust course and move on. Then they just become part of your new MO (modus operandi).

What’s your one guilty creative indulgence?

Jay and Leah: Nashville. Oh, um… Can you repeat the question?

What are you reading these days?

What fact about you would surprise people?

Leah: People are always surprised to hear Giant Ant’s origin story. When people ask us how we started Giant Ant, we often say we didn’t mean to, which is absolutely true. We were on a mission to make cool stuff together and it kind of built up around us. It all started with a video of us in the shower… But that’s a story for another time. ;)

Jay: Every single day I’m paralyzed by the fear of failure.

Leah: Well, when I was in 6th grade, I wanted to be one of those people on the BC Ferries who directs you where to park. So in a way, it hasn’t changed much. I’m still directing people and trying to put things in an order that makes sense.

Jay: It turns out that Ninja Fireman Astro-robot isn’t a career.. so…. I actually thought I’d be an architect, but it’s possible that I’m just not there yet. Life is long.

How would you describe what you do in a single sentence to a stranger?

Jay and Leah: We make videos.

If you had a magic wand, where would you be in five years?

Leah: milking a goat on my gulf island farm.

What keeps you awake at night?

What myths about creativity would you like to set straight?

Leah and Jay: We didn’t know there were myths about creativity. What are they?

Leah: Maui. Apparently that’s where people go when they are hugely pregnant or have kids. #thirtysomething

What practices, rituals or habits contribute to your creative work?

When you get stuck creatively, what is the first thing you do to get unstuck?

Leah and Jay: talk to each other. In the last ten years of being a unit, we’ve never once had a creative block at the same time (knocking on wood) so we can usually talk each other out of it or suggest a solution.

If you had fifteen extra minutes each day, what would you do with them?

The road to brilliance is paved with terrible ideas. — Jay Grandin & Leah Nelson

Creating a context where loving your work is possible is a really important ingredient to collaboration. — Jay Grandin & Leah Nelson