Sounds of the Sea

Valeria Vergara speaks about her work and research in regards to sounds of mamals specifically those of whales.

From the Vancouver Aquarium to Hudson Bay, from the Canadian Arctic to the St. Lawrence Estuary, researcher Valeria Vergara has listened to the communication sounds made by belugas in diverse environments. She is primarily interested in the communicative and perceptual abilities of marine mammals, and the conservation implications of such capacities. She directs and coordinates studies on beluga whales through the Marine Mammal Research Program at the Vancouver Aquarium. 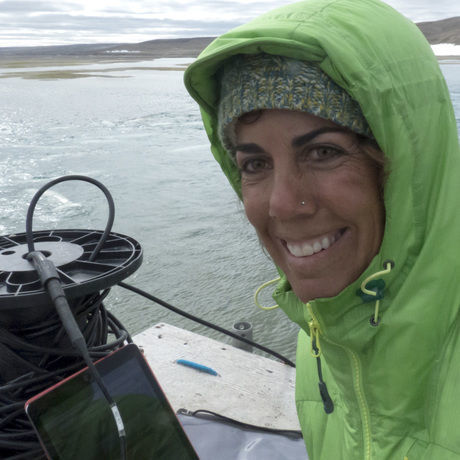 NOTE: Due to popular demand, everyone is asked to join the waitlist starting Friday, Nov 18 from which tickets will be issued via a lottery system.

Dr. Valeria Vergara has been eavesdropping on whales for years!

From the Vancouver Aquarium to Hudson Bay, from the Canadian Arctic to the St. Lawrence Estuary, researcher Valeria Vergara has listened to the communication sounds made by belugas in diverse environments. She is primarily interested in the communicative and perceptual abilities of marine mammals, and the conservation implications of such capacities. She directs and coordinates studies on beluga whales through the Marine Mammal Research Program at the Vancouver Aquarium.

Valeria Vergara’s ground-breaking doctorate research at the University of British Columbia was the first to document how beluga calves develop their rich repertoire of vocalizations and to identify contact calls critical for maintaining cohesion within the group and mother-calf contact. Her studies allow her to address the problems that this sound-centered species faces in an increasingly noisy environment.

How do you define creativity and apply it in your career? I see creativity as a temporary state of mind that feels like a lack of limitation and inhibition. When I feel creative, I buzz with energy and excitement, ideas flow, and some are sometimes scary in their “outside-the-boxness”, so in that state I often find myself wondering “should I dare?”. I am not sure I would say that I consciously “apply” creativity in my career. It happens, and when it does, it fuels my work. Creativity powers science, it is as central to good science as is curiosity. You probably would not even dream of being a scientist without a strong sense of curiosity, because, put simply, science is a quest for knowledge (about the way the natural world works). And you will need buckets of originality and imagination to be satisfied with the answers.

Where do you find your best creative inspiration? Alone in nature, daydreaming, or watching non-human animals large and small go about their lives around me.

What’s the one creative advice or tip you wish you’d known as a young person? To trust my intuition, that intuition and science are not incompatible, but that one is the precursor of the other.

Who would you like to hear speak at CreativeMornings? UBC Professor Emeritus Dr Lee Gass. You can read his writing and musings (several about creativity!) here: http://www.leegass.com/ An extraordinarily creative and inspiring thinker, artist and scientist (a hummingbird researcher), whom I have had the fortune to have as my PhD thesis co-supervisor and mentor. Lee is recognized as a great innovator in interdisciplinary teaching, and was instrumental in developing UBC’s interdisciplinary program “Science One”. He was awarded the UBC Killam Teaching Prize, the 3M National Teaching Fellowship, and, in 2002 he was named CASE/CCAE Canadian University Professor of the Year. Since retiring from UBC in 2004 Lee has been sculpting full time (creating breathtaking and engaging pieces) in his Quadra Island studio.

What’s your one guilty creative indulgence? I photograph crows. Here is the story of “The Crows of Trout Lake” project

How does your life and career compare to what you envisioned for your future when you were a sixth grader? My career is exactly what I envisioned when I was a 6th grader in Argentina… and even younger! I knew I wanted to do this since I learned that there are people called “biologists” that go out and try to understand animals for a living. But I admit I never guessed I would be doing this in Canada! And in the Canadian Arctic of all places!