part of a series on Serendipity
October 5, 2017

“If in doubt, Roman throughout” and more advice from a sign-writing veteran, Robbin Abbey.

A brief history of lettering, followed by the serendipitous path our speaker took to follow his passion of turning sign-writing into a life long successful career. Includes some lovely pearls of advice, ripe for the taking. 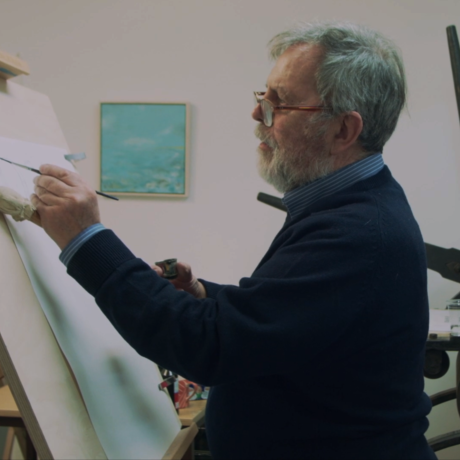 Robin Abbey was born into a farming family in Dorset in 1948. Ever since he can remember, he has been interested in all forms of lettering. Working with his mentor, Bev Blackmore in his sign-making business in Taunton he was thereafter, graphic designer at Wiltshire County council’s Printing Office, signwriter at Dunlop Rubber Co. in Birmingham, proof-reading at Barnicott’s printers in Taunton, and Wheaton’s of Exeter.

“I would copy the headlines from the paper, and whilst still at school in Bridgwater, Somerset, I painted a placard, which read ‘Farm Workers demand £7 now’ for the annual Martyrs rally at Tolpuddle. I went on to grammar school, and Somerset College of Art, gaining a City & Guilds in typographic design. All my working life I have been involved with printing or lettering of some kind.”

A serious life-style change in 1999, brought him to Edinburgh, where he decided to ‘go for it!’ From 2001 to the present he has been dedicated full time to what he knows best – signwriting!

There are a lot of Puritans about... also know as graphic designers. — Robin Abbey

Sign writers have style they don't have typefaces! — Robin Abbey

There's nothing that increases your confidence like being confident! — Robin Abbey

"it was as if I had cheated somehow, by only spending hundreds of pounds instead of ten of thousands on printers and all that paraphernalia." — Robin Abbey

"This is the bane of modern design really. People assume that you can only do what is there on the page. 'Adapting a type face?! AH! What a horrendous thing!'" — Robin Abbey