We kicked off our FANTASY event a little differently. Watch our wonderful attendees “striking a pose” for our very own CreativeMornings/Edinburgh Mannequin Challenge! 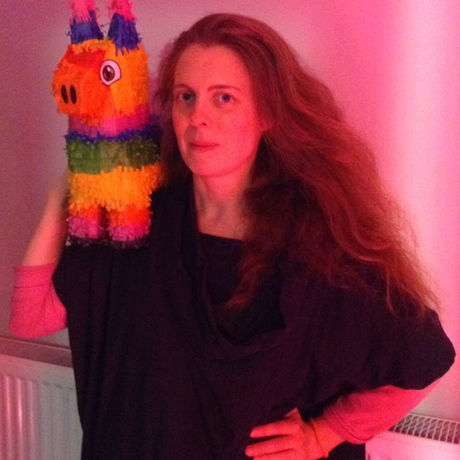 Born in New Zealand and socialised in Europe, Kat is an artist and researcher dedicated to practically investigating how to be an authentic human being whilst still somehow managing to thrive in contemporary society.

From winging it as a features writer to scumming it as a campsite toilet-cleaner, Kat has had an eclectic career to date. After studying Environmental Geography and Sociology at the London School of Economics, she moved to Germany to immerse herself in the language and culture. Several years working as an academic translator followed before a stint in psychiatric hospital led to a radical change in direction in her life-path. Through occupational therapy sessions she learnt how to sew and soon landed a job as a tailor’s assistant in a local theatre. Thanks to a Heinrich Böll Foundation scholarship, she was given the opportunity to further explore her new-found love for creative expression by studying Fine Arts in Kassel and Vienna. Her subsequent training as a professional clutter clearer with Karen Kingston gave her a much deeper insight into the interconnections between how we feel in the spaces we inhabit and the objects we choose to surround ourselves with.

Kat primarily explores her pursuit of self-improvement through immersive performances designed to take both herself and others to the edge of their comfort zones. By exhibiting in unexpected contexts, her interactive projects seek to challenge and surprise participants, blurring the boundaries between public and private, serious and nonsensical. Using a killer combination of humour and preposterous suggestions, her current project “the institute for lighter living!™” (ill!™) is committed to solving all the world’s issues, one personal problem at a time. During this year’s Edinburgh Festival Fringe, the institute offered ill!™ advice to hundreds of unsuspecting clients, popping up in various locations around town including Bob’s Blundabus, the Fruitmarket Gallery and Gayfield Creative Spaces.

In an attempt to convince you that she’s not just a tragically insular workaholic, Kat feels compelled to add that she also loves playing table-tennis, scrambling up scree slopes and organising quirky events such as breakfast raves.