As a married couple who own a bar and restaurant together, Jessica and Michael Sanders spend a lot of time in each other’s presence. Like, every minute of every day. So, not only are they in love, they also have to convince 250 people every night that they love them, too. Of course, that kind of face time presents its own challenges. Before long, the business and the “scene” that is the Austin bar community became priorities, and their relationship took a back seat. Please enjoy this wonderful talk about how they navigated their journey to stay in love … with both each other, and their careers. 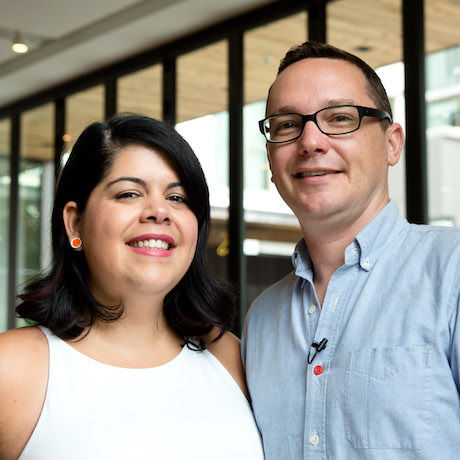 Jessica and Michael Sanders are bar owners and restaurateurs based in Austin, Texas. Partners in love and business, this husband and wife team abandoned corporate careers in media & advertising to pursue a shared passion for food & beverage. Together, they now co-own and operate drink.well., an award-winning gastropub nestled in Austin’s North Loop district and Backbeat, a highly lauded two-story cocktail lounge which debuted on South Lamar in early 2016. Their inventive concepts have been a lightning bolt for Austin’s food & beverage, amassing accolades from numerous publications including Bon Appetit, Food & Wine Magazine, Texas Monthly and Conde Nast Traveler.

Jessica Sanders was featured in Imbibe Magazine’s 2016 list of the 75 most influential tastemakers in the beverage industry. In 2015, she was a finalist for Wine Enthusiast Magazine’s ‘Wine Star Awards’ in the category of Best American Mixologist and she also been nominated for the CultureMap Tastemaker Awards for two consecutive years in the ‘Best Craft Bartender’ category. To be sure, it has been a meteoric rise for this former publishing executive-turned-bartender.

Michael Sanders has served as a Chair of Membership Development for the United States Bartenders’ Guild has been a sought-after lecturer on topics of bar ownership, entrepreneurship, service etiquette and hospitality fashion. Prior to pursuing entrepreneurship, Michael was an accomplished digital sales and advertising executive, with successful tenures at both Ogilvy & Mather and the AMC Network in New York City. Diagnosed with Type 1 diabetes at the age of 4, he has been a vocal advocate and fundraiser for the Juvenile Diabetes Research Foundation, both in NYC and in Austin.

The Sanders’ and their beloved pup, Dixie, are residents of East Austin. When not at their bars, they can be found drinking mezcal and engaging in a (sometimes peaceful) debate over who was more talented: Michael Jackson or Prince.