Ghislain Poirier shares insights on his creative process, the nature of play and the sometimes tense relation between creation and industry, which he solves with the equation FUN and RESPECT.

In his astounding conference delivered in front of an audience of some 200 Montreal creatives late October, musician-DJ-producer-creator Ghislain Poirier revealed – for the first time on camera – what to him could explain the success of creatives. To the audience’s surprise, the playful and ludic were mostly shunned as required yet insignificant components of the artist’s overall creative set of distinctive abilities.

Borrowing from various examples such as hockey players and other professionals who are generally deemed to be playful in essence, Poirier depicts “a day in the life of a DJ” as being nothing short of a repetitive, unexceptional series of tasks that largely resemble the daily lives of most office workers. Sure, the musician takes pleasure in musical creativity and the exploration of different new beats, but the vast majority of the time spent in and around music is devoted not to creative and playful exploration, but to the often disappointing process of filtering out many uninspiring creations, the perfecting of others, and the commercialization of one’s work…

Music: “You Tell Me” by Boundary 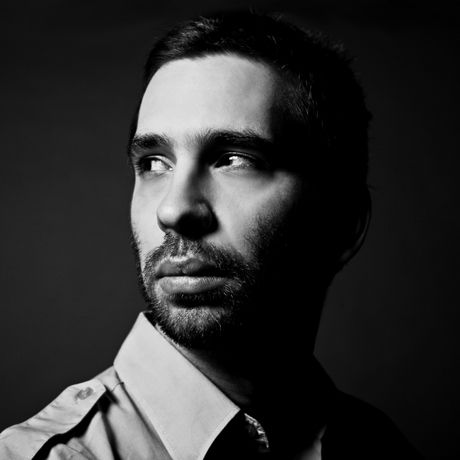 Drawing from a wide range of tropical riddims and urban electro, the power of Montreal-based DJ/producer Poirier’s bass blasts through any flimsy attempt to classify his music. Pinpointing the bits and pieces of dancehall beats, soca energy and electronic intensity is futile in the face of Poirier’s dance-driven creativity and air horn-worthy excitement. This is a man who just understands what works in the dance.

Poirier is constantly evolving. Landscapes of vibrant drums lead to pulsating, pitch-shifting, and infectious bass and synth patterns. He tears through new genres constantly, leaving a trail of packed, chaotic dancefloors in his wake. From his legendary Bounce Le Gros parties in Montreal (2005-2007), sell off events for two years running, to the bigger, better, bass-ier Karnival (2009-2012), Poirier has been unstoppable in his ability to mash styles, expand minds, and move asses. For five years running he’s held down Sud-West, a summer party series alongside his partner in crime, Ghostbeard. In July 2012, he also launched a new monthly called No Vacancy with partner The Salivation Army. The night focusing on dancehall, soca and azonto and they’re holding the fort—and getting forwards—at Royal Phoenix Bar, a hot new spot in Montreal.

Although based in Montreal, Poirier is also always moving—in just the past few years he has been invited to virtually every continent. Poirier on the bill equals a sure fire jam. No surprise that he’s shared the stage with Modeselektor, The Bug, Diplo, Kode9, Amon Tobin and Toddla T, as well as taken Fabric London, Australia’s Big Day Out, SXSW, the Montreux Jazz Festival, Barcelona’s Sonar Festival, London’s Notting Hill Carnival, Montreal’s Mutek and Mexico’s Cervantino Festival by storm.

Remixes are part of Poirier’s powerful repertoire, and he knows just how to pick apart a song and put it back together: bigger and heavier than before. Tracks by Popcaan, Gotan Project, Salif Keïta, Busy Signal, Erup, Schlachthofbronx, Pole, Ariane Moffatt and Bassnectar have all been given the Poirier treatment, garnering him attention from publications such as the Independent, the London Telegraph, Pitchfork, the New Yorker, the Wire and XLR8R. Every Poirier release presents a new, yet equally slammin’, perspective. The critically acclaimed independent release Breakupdown (2005), was followed by a signing to much-vaunted Ninja Tune. This resulted in dance-friendly No Ground Under (2008), a warm up for 2009′s cavalcade of dancehall-soca-electro EPs, also for culminating in Running High (2010). In 2012, Poirier released Soca Road on the label Mixpak and the dancehall/bashment riddim Alert Riddim EP with featuring by Natalie Storm, MC Zulu and Face-T on Man Recordings. In 2013 he released the Gal U Good Remix EP on Man Recordings a collection of four remixes based on the key track from the Alert Riddim EP.

Poirier has also produced work with a range of other artists. He co-produced Boogat’s El Dorado Sunset (2013), composing two tracks and also co-produced Face-T’s Tuff Like Stone (2012), where he made his mark on eight tunes. In addition remixing duties, he was also the creative director for Ariane Moffatt’s MA Remix (2012). Like these projects weren’t enough, Poirier composed music for two documentaries: United States Of Africa (2011) and The Downtown Project (2011). Finally, in 2013 he started a new project under the Boundary moniker and released an album: http://www.noboundary.ca

Giving the massive what it wants, yet providing a musical education in what it needs, Poirier is a producer and DJ who has no boundaries except, perhaps, the rule that it’s gotta have bass, and it’s got to bounce. With this philosophy, Poirier will keep the dance rammed.

Self-censorship is always nearby. It's on the prowl. It's the devil on your shoulder. — Ghislain Poirier

It's better to be pissed off than to be bitter. Being pissed off is a form of energy. It can be channeled and transformed positively. — Ghislain Poirier

It's only after creation that we must take a step back and look at what we've done. — Ghislain Poirier