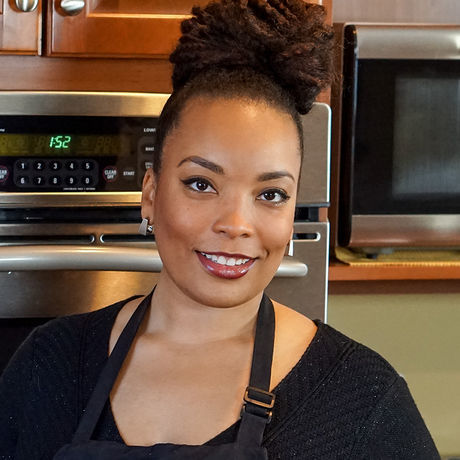 Angela Davis is a food blogger, recipe developer and freelance personal chef based in the D.C. metro region. In 2012 she created The Kitchenista Diaries food blog to document her journey as a self-taught home cook and amateur food photographer. A former construction accountant, she found her true passion in food and eventually transitioned to life as a full-time creative. Angela has since organically grown a social media following of over 130,000 and self-published three digital cookbooks. She currently resides in Northern Virginia with her two children.

These are marathon cooking stations, but practice staying grounded and for what it is, these are skills that are easily transferable. — Angela Davis

I believe every dish tells a story. — Angela Davis

Think about the ways that the holiday food traditions do impact you. How does it connect you to your past, to your family’s heritage, to your culture? What memories are triggered by those smells and the visuals and the taste of the holiday food? — Angela Davis

Sometimes food is not about a personal thing—it’s creating that memory for somebody else. — Angela Davis

Cooking is a sensory experience and those memories can be very vivid, depending on what you’re connecting to. — Angela Davis