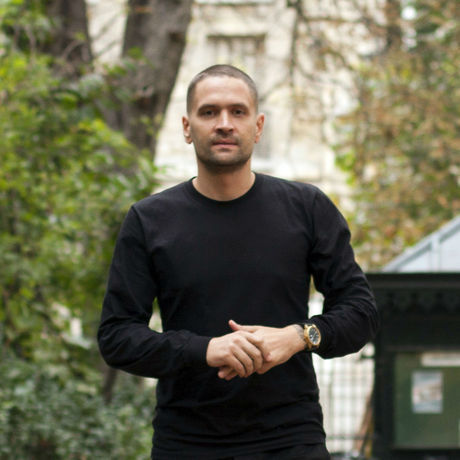 A salesman by nurture, Steven Artemiw has worked at all levels of the retail apparel industry, spent a few years in the wholesale side of the business, and now you’ll find him as Account Director for Offshoot Inc., a Toronto based web development firm.

An inquisitive chameleon by nature, Steven has at one time or another, been a skateboarder, a snowboarder, a stamp collector, a magician, an archaeologist, a painter, a photographer, a guitarist, a cellist, a pianist, a drummer, a night club promoter, a bike courier, a cook, a curler, a runner, and a rock climber.

In 1999, he was awarded a Protégé Grant by the Toronto Arts Council, selected by Lifetime Achievement Award recipient, Stan Bevington of Coach House Press. The resulting commissioned work paid homage to Toronto’s first mayor, William Lyon Mackenzie, and the power of the written word.

About Parkdale Roadrunners In the summer of 2010, Mike Krupica and Steven Artemiw took to the sidewalks and streets of Parkdale, Toronto, pushing themselves to become more consistent runners. The two friends printed up a few T-shirts to wear while clocking kms – on the back was printed “The Mascot Running Club,” and the front proclaimed “I’d Rather Be Smoking.” The shirts got mixed reactions, but they also got people asking how they could join this club. So Mike and Steven picked a time and place: Tuesdays at 8 pm, at the Mascot Café.

Since October of that year, every Tuesday, rain or shine, the two friends headed out with anyone who wanted to run. As the group grew, its diversity reflected that of the city: women and men, from early twenties to pushing 40, bar owners, nurses, web designers, artists, creatives, tradesmen, entrepreneurs, students and more showed up each Tuesday. They all gathered to enjoy one thing together: running.

At the end of 2012, a core group of regulars formed Parkdale Roadrunners. These runners pushed themselves – and one another – to run further, faster and more often. They began entering races and training multiple times a week. Members have since excelled beyond their goals in events such as the Around the Bay 30K, Sporting Life 10K, Ragnar Relay Niagara, Chicago Marathon, Eugene Marathon, Copenhagen Marathon, Toronto Marathons and the Red Hook Crit 5K.