To celebrate Pride in Cardiff, local icons Sam Hickman, Chris Hicks and Selena Caemawr come together for a one-off evening event to discuss what justice means to them, from creating their own communities where they didn’t exist to challenging ableism, sexism and more. 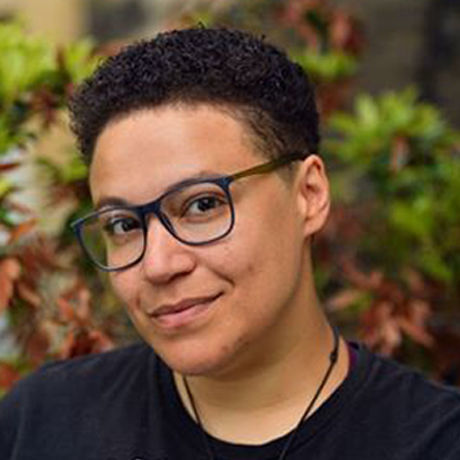 Selena Caemawr is the director of Aubergine, a queer- and autistic-run café based in Cardiff’s High Street Arcade that was created by two friends who wanted to empower autistic people through accessible environments and innovative working practices.

Outside of their work with Aubergine, Selena is also an activist and poet whose spoken word performances as a queer, trans and autistic person of colour with mental illness are created to challenge perceptions around race, disability and gender. Along with these topics, Selena’s talk for #CMjustice will cover their reasonings for creating Aubergine and how the café enables their workers and patrons to simply be themselves - confidently and fearlessly.

Please welcome to the stage: Christopher aka Christobel aka Sissy Boy Tears!

Chris was born and raised in Bridgend; growing up queer in a small town in the 90s wasn’t particularly great, so they set their sights moving to Cardiff to study Art & Aesthetics at UWIC, where they finally found their identity after establishing a small community of likeminded queerdos.

It was after their move to Cardiff that Chris discovered the importance of safe and inclusive spaces. After getting involved in events that catered for the marginalised such as Mayday Mayday, Peppermint Patti and Hells Bent, Chris set out to create a new space of their own: Hey Mary, a predominantly LGBTQ+ event that’s open to for everyone to come, be free without judgment and, most importantly, dance their worries away.

Sam Hickman is trying her best! The Cardiff-based singing harpist is an iconic clown with musical stylings combining both her American and British upbringings. By juxtaposing her beautiful voice, elegant harp-playing and filthy humour, she truly is a triple threat – who can also dance!

After a wild 2018 that consisted of releasing her latest album, performing her one-woman show, appearing on BBC Radio 3 and hosting her smash hit podcast ‘Hyper Local Celebrity’, Sam shows no signs of slowing down this year. The songstress will return to the stage with her new show ‘Marge In The Moon’ in The Moon on Womanby Street on the 10th September.

Hosted by The Gate