Storyteller, TV Producer, and all around lover of Pittsburgh 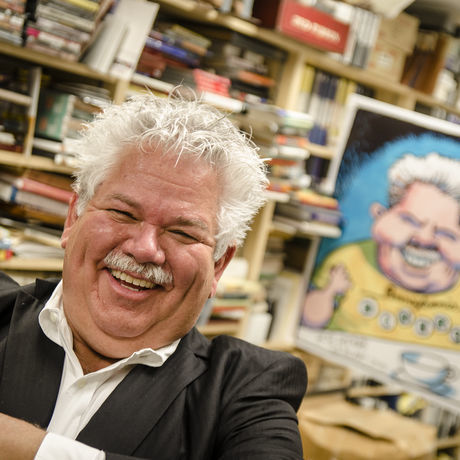 Since he joined WQED in 1987, storyteller and TV producer Rick Sebak has celebrated the Pittsburgh region with passion and enthusiasm. A native Pittsburgher, he was born June 5, 1953, the day the Squirrel Hill Tunnels opened, but he claims he hasn’t slowed down yet. People in Western Pennsylvania know and love his programs.

Rick has produced, written and narrated some 25 hour-long local specials that are collectively known as the Pittsburgh History Series. That series includes “Kennywood Memories,” “Things That Aren’t There Anymore,” “Downtown Pittsburgh,” “The Strip Show,” “It’s The Neighborhoods” and “25 Things I Like About Pittsburgh” among many others. He also hosted 3 seasons of a regular weekly series called IT’S PITTSBURGH & A LOT OF OTHER STUFF, which featured the award-winning “The Dirty Dozen: A Stupendous Bike Ride” as well as “North Park vs. South Park,” “The Joys of Millvale,” “Squirrel Hill Tunnels” and “Why Do You Live In Pittsburgh?,” to name just a few. In 2016, he has premiered two programs on WQED: “Return To Downtown Pittsburgh” and “Another Trip Downtown.”

In 1993, PBS decided that Rick’s state-wide documentary called “Pennsylvania Diners & Other Roadside Restaurants” deserved a national broadcast. Its success led to more than a dozen subsequent national Sebak productions from “A Hot Dog Program” and “An Ice Cream Show” to “A Ride Along The Lincoln Highway,” from “A Cemetery Special” to “A Flea Market Documentary.” Like the Pittsburgh programs, these specials feature unique tales, unforgettable places and fascinating people. Rick’s friendly interviews often yield surprising results. In 2015, he and his team of collaborators produced “A Few Great Bakeries” and “A Few Good Pie Places” that both premiered nationally on the same night in August.

Rick Sebak has received many honors, including ten regional Emmy® Awards and an honorary doctorate from Seton Hill University. He was nominated for two Prime Time Emmy Awards for his work on the PBS program titled “Fred Rogers: America’s Favorite Neighbor.” In 2013 The Press Club of Western Pennsylvania gave Rick its President’s Award for Lifetime Achievement. At the end November 2012, The City of Pittsburgh (which usually honors people with a dedicated day) proclaimed that the entire next week would be Rick Sebak Week in the city of Pittsburgh. It was just part of the celebration of his 25 years at WQED, including a profile in the Post-Gazette, a half-hour documentary titled “What Makes Rick Tick,” and an editorial in the City Paper where editor Chris Potter wrote about Rick: “He’s gone from celebrating local landmarks to becoming one. Probably no one this side of the Pittsburgh Steelers has this kind of popularity: a popularity that transcends generations, political divides and thousands of miles…. In a way, this is Rick Sebak’s town. The mayor just governs it.”