Curiosity shouldn’t cost much, but often does.

From train-sets to niche cycling erotica, art historian Nicholas Oddy shows us the paths dedicated curiosity can take us. 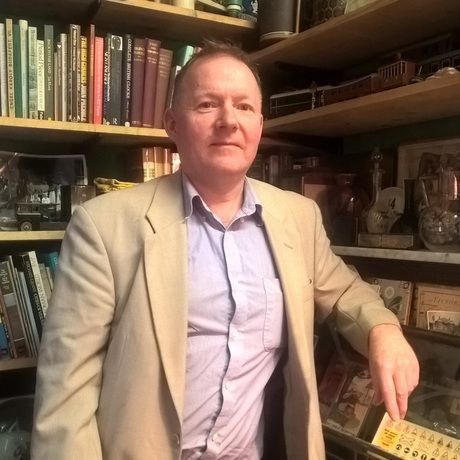 Curiosity shouldn’t cost much, but often does.

Nicholas Oddy is head of Design History & Theory at Glasgow School of Art. Before that he taught at Duncan of Jordanstone College of Art (Dundee) and Teesside Polytechnic… ‘polytechnic’ should give you some idea of his age. Before that he studied Design History at the RCA and before that Edinburgh College of Art where his original degree was in ceramics (deceased) and glass (still alive, sort of). Academically he is associated with cycling history, but is probably better understood as a collector, of old cycles, signage, toy trains, table glass, the list goes on. At various times he has acted as a consultant to major auction rooms for cycles and cycling memorabilia, toys and collector’s items. Essentially he is curious about things, mainly hard objects that in some way demonstrate various issues in the history of commercial design, its design process and cultural context. He’s quite old fashioned; so don’t expect much on the virtual world, although he uses it a fair amount to acquire old stuff, it’s the old stuff that interests him.

Curiosity is different from instinctiveness to just go towards something, or be attracted to something. Curiosity has a sort of basic intent to learn more... or at least learn from the experience. — Nicholas Oddy

Curiosity is often underpinned by a knowledge of the object, so certain which come through, and feeds itself. — Nicholas Oddy