Petra Bachmaier and Sean Gallero of Luftwerk speak about the love they have for what they do and the inspirations that inform their work. 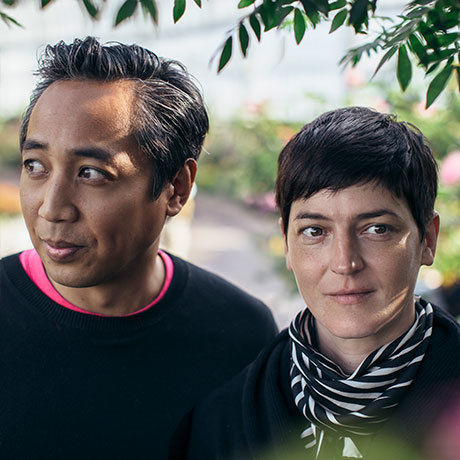 Luftwerk is the artistic vision of Petra Bachmaier and Sean Gallero. Together, they create art installations using light to transform experiences of space and site. Through their work, they manipulate and sculpt light to discover how it materializes and dematerializes surface and environment. They explore the properties of light to reveal the visible and hidden characteristics of their surroundings. Luftwerk takes an interdisciplinary approach, experimenting with a spectrum of materials and techniques to advance their artistic medium. Their work intends to shift viewers’ perceptions of space and site through light and color, inviting the public to experience the familiar transformed. With immersive artwork at landmarks such as AT&T Plaza in Chicago’s Millennium Park, Frank Lloyd Wright’s Fallingwater in Pennsylvania, Mies van der Rohe’s Farnsworth House in Illinois, and most recently Chicago’s Garfield Park Conservatory as well as Munich’s Bayerische Staatsoper to name a few, their work blends history and contemporary media to open new aesthetic conversations within public spaces.

Petra Bachmaier, originally from Munich, holds an MA from the University of Fine Arts of Hamburg, Germany. She also holds a BFA from The School of the Art Institute of Chicago (SAIC) and spent time at the Gerrit Rietveld Academie, Amsterdam. Sean Gallero, originally from the Bronx, NYC, studied art and humanities at Lehman College with a focus on applied arts. He continued his studies at The School of the Art Institute of Chicago. Bachmaier and Gallero met during Performance Art studies at SAIC and have collaborated since 2000. The artist duo formed Luftwerk in 2007. Projects to date have been featured in periodicals such as Architectural Record, Condé Nast Traveler, Dwell, The Creators Project, and designboom. Recent awards include an Endorsement Award for Innovation from Surface Magazine, a Media Art Award from the National Endowment for the Arts (NEA), a CODAaward for integration of commissioned art in a public setting, and two featured projects honored by the American for the Arts Public Art Network (PAN).

What does love mean? It's always about seeking to be one. — Luftwerk

It's impressive how large of a scale two minds can achieve. — Luftwerk

Hosted by The Nerdery