Lola Frost demondstrates what it really takes to be sexy.

As Vancouver’s Rock’N’Roll Flapper, Lola Frost is best known for combining her anachronistic styles of vintage and modern – a true 1920’s starlet with a kiss of Ramones grit. A passionate stripteaser since 2006 her pieces are a censorial experience to behold; an elegant blend of dance, theater and fervent striptease. 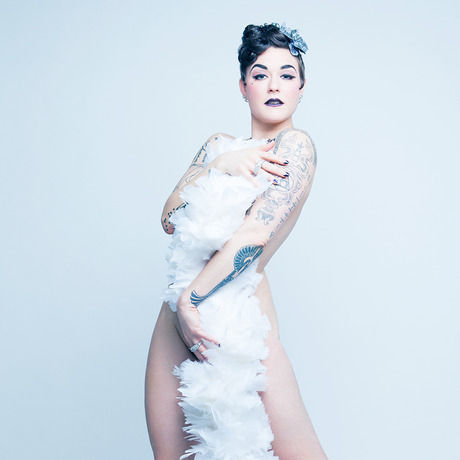 As Vancouver’s Rock’N’Roll Flapper, Lola Frost is best known for combining her anachronistic styles of vintage and modern – a true 1920’s starlet with a kiss of Ramones grit. A passionate stripteaser since 2006 her pieces are a sensorial experience to behold; an elegant blend of dance, theater and fervent striptease. “She has incredible stage presence, plus a visceral physicality that demands to be watched and admired” – Tigger!

Performer, teacher and mentor, Lola is co-director of the Vancouver Burlesque Centre and integral member of Sweet Soul Burlesque. She has been internationally recognized at festivals such as Teaseo-Ramma, the Colorado Burlesque Frsticval and the Vancouver International Burlesque Festival, where she was awarded “Sexy, Sultry, Sizzlin’ Striptease” (2009) and “Most Dazzling Dancer” (2013). She has, with great honor, competed at the Burlesque Hall of Fame in the categories of Best Debut (2010), Best Duo (2012 & 2013), Best Troupe (2010), and in 2013 won 2nd runner up in the category of reigning Queen of Burlesque – Miss Exotic World, currently ranking her 3rd best in the world. A published and noted writer she has been featured on the 21st Century Burlesque Magazine site and in Berlesker: Handcrafted Literary Journal along with keeping her own blog with a steadily growing following. She is proud to be a RED Burlesque Lipstick signature shade girl and to have been voted #22 in the top 50 of Burlesque by Burlesque Magazine in 2012 and #13 in 2014!

Lola produces, performs and emcee’s internationally as well as locally. Co-producing Le Cabaret Du Passé, a macabre style variety show the 3rdTuesday of the month at Guilt & Co. While being featured at The Keefer Bar, infamous with locals and celebrities alike, every Thursday with Sweet Soul Burlesque.

I don't teach them, I just give them permission. — Lola Frost

As an artist, you're here to create and stand with integrity and stand for what you believe in. — Lola Frost

Always having the dialogue open, took the shame away from sexuality and from our bodies. It opened up a conversation. — Lola Frost

My body is my medium. The narrative of how I go from costumed to mostly naked, or sometimes fully naked, is the dialogue for what I do and my art form. — Lola Frost