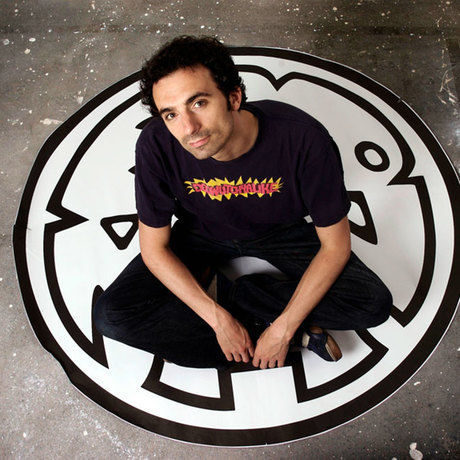 Jeroen Hofs aka Eboman is internationally known for his audiovisual performances and video sampling.

Jeroen studied at the HKU. In 1996 he won the Zilveren Harp and a year later the Popprijs. The general public got to know Jeroen with his hit Donuts With Buddah.

With Ebostudio Jeroen creates engaging audiovisual experiences on and beyond the mobile screen. One of his designs is a special suit to control his personally developed video samples and showcontrol software’. With this style of sampling, he calls ‘Sample Madness’, Jeroen was one of the winners of a Webby Awards.

Ebostudio builds interactive video and show control technology for creatives: agencies, performers, dj’s, event organisations, media producers and their audiences. Projects like Augmented Stage (technology to control a live show with a 3D camera) en Interactive Tracks (personalizable music and video compositions for mobile devices). For creatives they build technology that enables them to produce an unparalleled audiovisual experience. Ebostudio provides the crowd with tools that empower them to customize these experiences and share them with the rest of the world.

In this talk Jeroen will tell us how audiovisual interactive media has shaped his life. How he does research, experiments and be successful as an entrepreneur at the same time.