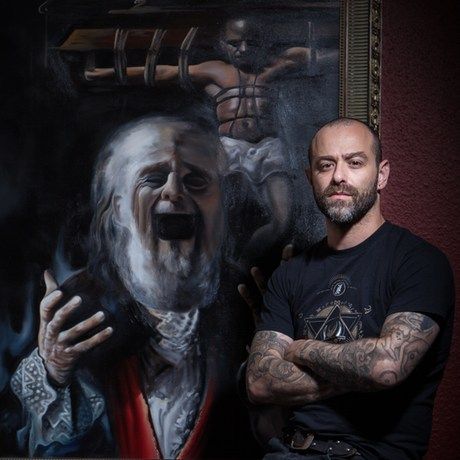 Guil Zekri is a baroque inspired painter and tattoo artist. Born in September 1974 in Israel.

In the end of 2003 Guil has decided to move to Germany in search for a job in any way related to art. And the world of tattoos has opened his arms, Guil Zekri is today one of the most innovative tattoo artist in the international scene, and known for his realistic, dramatic and mysterious compositions.

In 2007 Guil Zekri has established his artist reputation by opening his first studio Reinkarnation in Cologne, Germany, which was followed by the second studio in 2014. Since then Guil has travelled in all major cities in Europe and participated in the important tattoo conventions, appeared in numerous magazines, books and did the art work for the London convention 2014, cover art work for the music band “ghost of a campaigner” and worked with the model Stefan Thompson on a series of 3 paintings representing white angels.

Guil´s close contact with his family in Israel creates second reality after living in Europe for 16 years and the contrast between the 2 realities has created a direction in his work. His oil paintings are a combination between baroque and romanticism and the themes are influenced by his jewish upbringing and his life in Israel.

In the moment Guil is working on his first expositions and on his gallery/atelier as well as on a few new paintings that bring a higher technic quality and deeper themes.