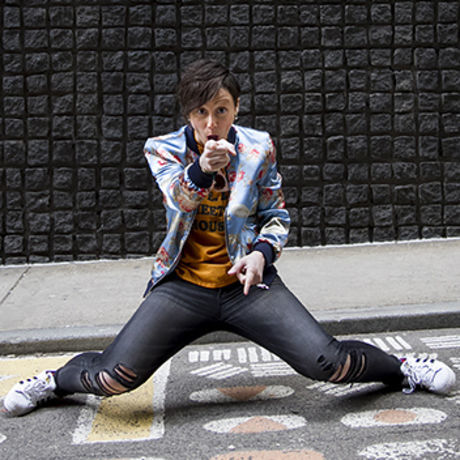 Gab Bonesso is an award-winning standup comedian, columnist, actress and children’s performer. She has won the title “Best Comedian in Pittsburgh” three times. Twice voted by the readers of Pittsburgh City Paper and once voted by the readers of Pgh Magazine. Gab is credited for pioneering the Alternative Comedy scene in Pgh and in 2012 she was awarded a Grant by the Pgh Foundation and was given an Experimental Artist Residency at Carnegie Mellon University where she developed new work. Gab wrote a weekly column for AOL from 2010-2012 called “Rocking the Suburbs”. During 2011-2013 Gab performed corporate comedy and hosted corporate training videos for American Eagle Outfitters. Gab also toured the United States and Canada hosting a documentary series for the company. In 2011 Gab teamed up with Pittsburgh-based musician Josh Verbanets (lead singer of Meeting of Important People) and co-created The Josh and Gab Show which is an anti-bullying rock and roll comedy stage program for children. The Josh and Gab Show has been featured in schools, music festivals, churches, libraries and conferences all over the North Eastern region of the United States and they headlined a music festival in Monterey, Mexico. In 2015 Gab delivered a TedX Talk at the Byham Theater in Pgh on the subject of The Role of Adults in the Anti-Bully Movement. In 2017 Gab was the first comedian signed to Misra Records. Her first comedy album: Everyone’s Dead was a cathartic release after the back-to-back losses of her mother and brother the year earlier. Gab has written and appeared on radio as an On Air Producer for CBS (2007-2008). She was even nominated for an AIR Award for “Best New Talent”.

As a comedian Gab has featured or opened for headliners such as Richard Lewis, Brain Posehn, Tommy Chong, Jen Kirkman, John Hodgman, Kurt Branholer, Dustin Diamond, Adam Sank and Lizz Winstead. As an actress Gab has appeared in spots on Television/Internet for Sony Jobs, The Ruscitto Foundation and WQED Anti-Bullying PSA’s, City Paper Local Motion Fashion Show, American Eagle Outfitters and The Scare House - Burgatory - Lemieux Foundation “ScareHouse Shake” Promotion. Gab can currently be seen in Movie Theaters around Pgh in an Anti-Bullying PSA shown directly before the movie trailers. Lizz Winstead (co-creator of the Daily Show) has referred to Gab Bonesso as a “superstar” and Richard Lewis said that Gab Bonesso is “the real deal and f***ing hilarious”.