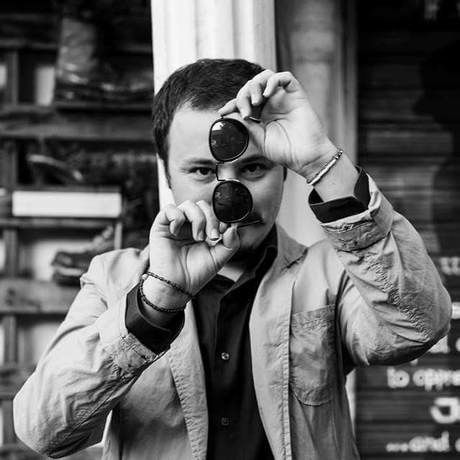 Eljan Tanini is a human who lives in Tirana: the city of small tyrans. He don’t write any more for fun on newspapers and magazines. For pleasure Tanini drives only the bycycle. His origin is from everywhere and he was born in a year with numbers. Every once in a while he donates blood, as a sign of delivering life particles to those in need.

He studied painting at the Lyceum “Jordan Misja”, and graduated in Philosophy and Sociology at the University of Tirana. In November 2009 he published his first book “Tregu i Zeros”, (The Market of Nothing) via Ideart Publications, with esse and reflections. In November 2011, Eljan Tanini won the international photography award “Focus”, with a photo titled “Si puthja për babën.” (Just like a kiss for the father). After working for a period of time as a journalist in Boom Boom Radio, Klan Television and Top Channel, now Tanini finally is free, freeeeeeeeeee. What a miracle! He is also very active in the social media and runs his own blog “Letra nga Republika e Shkarravinave” (Letters from the Republic of Scribblings) http://eljantanini.al/ Tanini is also a green pollution activist of the infamous initiative “Plant your own tree” (Mbill pemën tënde) which he created together with his friends. They plant for two years 11.140 trees all over Albania. On May 2014 U.S Ambassador Alexander. A. Arvizu awarded “Plant Your Own Tree” as ACT Now! Tanini is also a green protester. In July 2014 he participated in Kikinda Short Story Festival. Later Eljan was published in the “Anthology of Small Countries”, a book which is published after 40 years by Booksa in Croatia. (translated by Shkelzen Maliqi, selected by Arian Leka). November 2014, All Nightmares cafè. Book with 19 interviews co-authored, UET Press In November of 2015, with the help of a youth group associated with the virtual poetry world, Eljan Tanini was published in the “Antologjia e poezisë së Dangerous Method” (Anthologhy of Poetry From Dangerous Method) by Albas Publications. Thanks to a collaboration between Poeteka, Ministry of Culture and Traduki, later in December 2015 he won a writer residence in Split, Croatia. March and April 2015, in the surroundings of the former Yugoslav Embassy, (today almost abandoned) he opened: “Not a Personal Expo” – Silent Stains, with 75 photos. Lately Eljan Tanini completed his poem “Pa Pik” (Without Punctuation) which was published in February 2016, from Poeteka. September 2016, participated in POETEKA – dadaEAST – dadaDAYS. In March 2017, he is publishet in the Albanian Anthology in Montenegro. (and recently also published by Beton in Belgrade, translated by Anton Berishaj). May 2017 paralel Projects: Mediterranea 18, Young Artists Biennale, Tirana-Durrës, 4-9 May 2017 (author of mural). July 2017, author of Freedom’s Truck Tr 04 – 333 commemorative installation 25 Setember – 25 October 2017, Personal Expo “Class Work” with riddles, Vila Ironbrush-Tirana. October 2017, “Ëndërr fëmijërie” (Made by dreams), author of art work installation. (Monument of paper airplane origami in the former airfield of Tirana) Personal Expo Home work, FAB Gallery, 1-9 April 2018. Eljan Tanini is also published in the review Poeteka and Milosao cultural newspaper. It is time to stop now. No more talking about him.

Game is the continuation of your personal goals. It is for you not to let any case escaping from the beginning till the end. It does not matter if you lose or win, the important thing is what you will keep in mind, and how you will solve the other game. To love playing for one after one is the same as the first day you dreamed of your personal goal. Game is all the facts realized and not realized in our lives. How this is managed later depends on you and me.

Game at the local level is the irritation of the nerves of what we see on the TV screen, of what always slanders us. It’s the assassination of the opposing party to the end and the approach to the public tired of everything that has happened before. For me it is also not the continuation of what has been started properly. It’s the reason of people who choose to not watch TV. Where for a few days I started to participate too.

All my life of these moments is Game: Activist + Tree + Poetry + Artist = Atractivist