In rare moments of clarity, insight and realization, we may glimpse powerful visions of the person we are meant to become. But when the moment dissolves, we often find ourselves right back in the familiar grooves of our well worn patterns. In this exploration, Chris Parks shares a range of techniques that he has used to create inspired artwork, overcome fear, gain relief from self doubt and release the steady grasp of his ego in order to become a better instrument for transforming inspiration into reality. 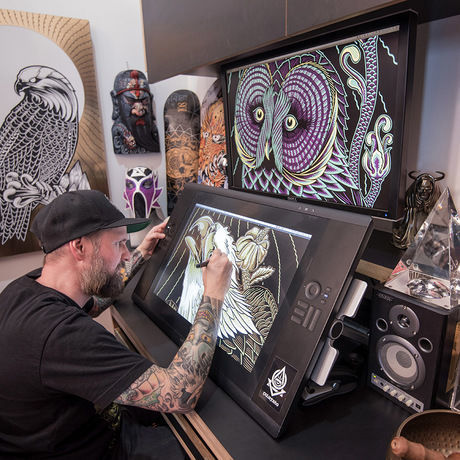 Chris Parks is the digital illustrator and fine artist known as Palehorse. A graduate of the Ringling College of Art & Design, Chris spent his early professional years splitting his time between design agency work and freelance illustration projects. In 2006 he opened his first studio and gallery space, and now has well over a decade of experience as a professional artist.

Combined with roots in straight edge hardcore, Tampa metal bands, skateboarding, and tattoo art, Chris has an ongoing fascination with ancient Asian and Latin cultures, cultivated by travel and research into sacred art. A curiosity to better understand the esoteric meanings behind the images, deities and mythologies of these cultures lead Chris to view his creative process as part of a greater spiritual practice where he invokes Buddhist, Hindu and Toltec philosophies to guide his work and tune into to the universal, creative force that is flowing through everyone and everything in existence.

Under the moniker Palehorse, Chris designs screen-printed gig posters, skate decks, T-shirts, and gallery artwork His bold, colorful, and intricate illustrations have been commissioned by companies such as: Nike, Mini Cooper, DC, WWE, Hasbro, Penguin Books, Modelo, Brisk, Pabst Blue Ribbon, Sonos, Variety Magazine, Wired Magazine, and many others. Chris is the also the curator of the SHINE Mural Festival and a champion of local artists and creatives.