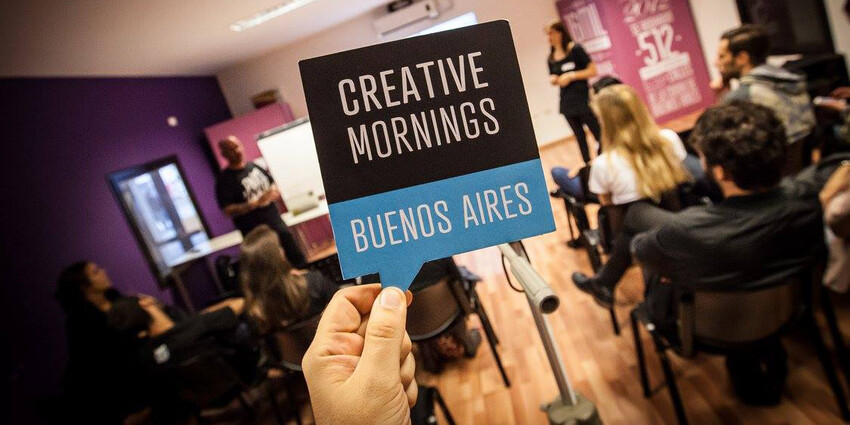 CreativeMornings Chapters Come in All Shapes and Sizes

CreativeMornings/DC is a behemoth, with tickets selling out in minutes and venues holding hundreds of people, usually time to meet and talk with just a minuscule number of the interesting people assembled for any given event.

When I visited CreativeMornings/BUE, I found myself in a much more intimate setting, located in a government-funded industrial park that houses varying creative initiatives throughout the city. I arrived in the midst of a downpour, but the host of the chapter, Laura Marcello, was nonetheless beaming as I walked through the doors. “Thank you so much for coming,” she warmly welcomed, her six year old son in-tow. Pedro scurried around the two dozen assembled participants, acting as the unofficial CreativeMornings greeter and serving up a natural dose of caffeine as we waited for the coffee to arrive. It almost felt like CreativeMornings was being hosted in Laura’s living room, an intimateness that served as a nice shift from the hustle and bustle of previous cities. This level of intimacy was fitting, as the lecturer was speaking on a project that centered around that very subject. Gerardo Montes de Oca is the founder of an initiative called Pinto la Isla, which translates to “the painted island.” He’s working with a wide assortment of street artists from around Buenos Aires (and the world) to cover every inch of the extremely poor neighborhood of Isla Maciel in street art. The cornerstone of the project is muralism workshops led by Gerardo and his colleagues, allowing local students to learn the craft of street art and infuse their own stories and experiences onto the walls of the neighborhoods that they live in.

One of the things I’d neglected to sufficiently consider when planning out my CreativeMornings World Tour was one of the most basic tenants of it - language. Montevideo and Buenos Aires are conducted entirely in Spanish, something that should have come as no surprise given that both cities are located in South America, but nonetheless a language I possess just enough knowledge of to communicate in Spanish that I can’t speak it (“no entiendo”). Lima will be the same, whereas Prague will be conducted in Czech and Tel Aviv will be conducted in Hebrew. In fact, all but two of the countries I have planned to visit over the next year will be in languages that I can neither speak nor understand.

That presented an interesting predicament: how do I properly take advantage of these local chapters, let alone learn enough about them to write a lengthy, entertaining blog post?

My solution has been to take a deeper focus on getting to know the hosts and support team of local chapters, whom I speak with after the lectures themselves, hearing their interpretations of the lecture while also getting further context about the chapter and the local creative community. When I asked Laura to bring me to the site of her creative inspiration, she brought me to a local park. Sitting in the middle was a towering dome, the site of the Buenos Aires Planetarium. She had brought along a basket, filled to the brim with all the ingredients needed for a matte picnic - the traditional bitter tea drink preferred by Argentinians and Uruguayans. “I would come here as a kid, and be enamoured by this space. Even though I don’t come back here often, it’s always been a place I think of when looking for inspiration,” Laura explained. Like DC and Montevideo, Buenos Aires has a close knit team that has been there since the beginning, brainstorming and helping to assemble everything needed for each month’s event. Unlike most cities though, it turns out that Laura and her team had applied to host CreativeMornings/BUE at the same time as another prospective group. “The individuals that we were ‘competing’ against put together a great presentation. But we really tried to put forth a unique approach, and we ultimately won out,” she said.

Laura said that her approach to curating the local CreativeMornings chapter was more so about doing something unique that would contribute to the community. Big name speakers, she says, are less interesting to her than lesser-known ones that can speak on compelling, thought-provoking topics. She wants CreativeMornings to provide a distinct value proposition to Buenos Aires, a city already flush with events.

One of Laura’s team members is Emanuel Gomez Miranda, a videographer by trade who is responsible for recording each month’s lecture. He is the one that led the assembling of their successful CreativeMornings application video.

A freelancer until two years ago, Emanuel is now employed as a videographer for Casa Rosada, Argentina’s Presidential Palace widely known as the “Pink Palace.” If you’re a musical theatre fan, you might recognize the balcony of his office building from the 1996 movie Evita, where former First Lady Eva Peron sings to the thousands of amassed citizens, “Don’t Cry For Me Argentina.”

While the fascinating and storied life of Eva Peron doesn’t include doubling as Madonna, the star of Evita who sings the famous song and actually recorded it on-location at Casa Rosada, she nonetheless continues to be a deeply divisive figure on Argentine politics decades after her death. And despite very few parts of Casa Rosada being open to the public, Emanuel was kind enough to give me a private, VIP-tour of his famous office on my last week in Buenos Aires.

Emanuel’s job is to manage the image of Argentina’s presidential palace through video. And he had just finished one of the busiest weeks of his career, supporting the visit of a distinctly special guest, President Barack Obama. His visit had included the signing of a historic treaty with Argentina’s new president, Mauricio Macri, along with an extravagant state dinner, so Emanuel was enjoying a little downtime before work ramped back up again the following week. The physical and symbolic image of Casa Rosada is a mixed one for the people of Argentina, a country that was infamous throughout the twentieth century for regular disruptions of democracy, many of them violent. Many people hate it’s pink, chalky color, and the building is frustratingly disproportional, half of the building’s right facade having been demolished to make way for a highway overpass that was ultimately never built, some might say representing an apt metaphor for Argentine politics. It’s new logo - a round circle hung underneath the center arch of the palace, the winner of a national design competition to mark the anniversary of Argentina’s independence - also attracts widely diverging points of view, particularly from the creative community. While there’s no shortage of material to debate about Casa Rosada’s public image, the extravagance and beauty of its interior is hard to contest. Similar to the White House, and I’d imagine many similar buildings in capitals around the world, there are distinct ceremonial rooms that are impeccably kept up but rarely used. Emanuel and I walked into the room that had housed President Obama’s state dinner the week before, the velvet red chairs neatly assembled in the back. A towering chandelier sat in the middle of the room, the ceiling reaching up more than two stories, glimmering with gold leaves.

Eva Peron’s personal office was neatly sealed off in a quiet corner of the second story, a portrait of the famous First Lady with her husband, President Juan Peron, hanging at its entrance. Her personal desk lay on the side of her personal parlor, but I made sure not to touch it, sure that an army of guards would descend on me the moment I dared to. As I stepped onto Peron’s balcony, the actual location where Madonna’s famous scene was filmed for Evita, I looked out at the tourists assembled at Plaza De Mayo, the plaza that has housed some of Argentina’s most tumultuous historic events.

As we neared the end of the tour, I received an unexpected text from work that I needed to hop on a last-minute phone call. Emanuel ushered me into the nearest room - the presidential press briefing room - and there I sat, my colleagues possessing not the slightest clue of the surroundings in which I was taking my call. But amidst all of these historic rooms, what captured my attention the most was the courtyard. The wide arches that circled around the palm trees and fountain in the center of the building are a sight to behold, and as Emanuel and I climbed to the top story of Casa Rosada, we looked down at the workers circulating about the lower levels like worker bees. Despite its glamorous ceremonial rooms and marble staircases, at the end of the day, Casa Rosada’s primary purpose is an office building, albeit with a very important purpose. Having a perspective to watch over hundreds of Argentine citizens serving their public duty to run this country felt like a privileged way to end my month there.

Laura, Emanuel and the individuals that make up CreativeMornings/BuenosAires are as vibrant as the city that they call home, tirelessly working to breath creativity and passion into their community. They both provided a beautiful lens through which to discover the many layers of this storied and romanticized city on my #CMWorldTour. 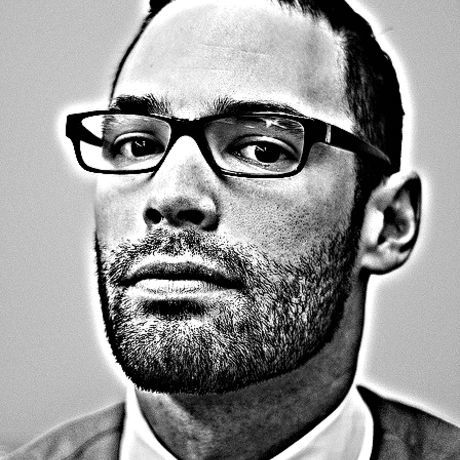