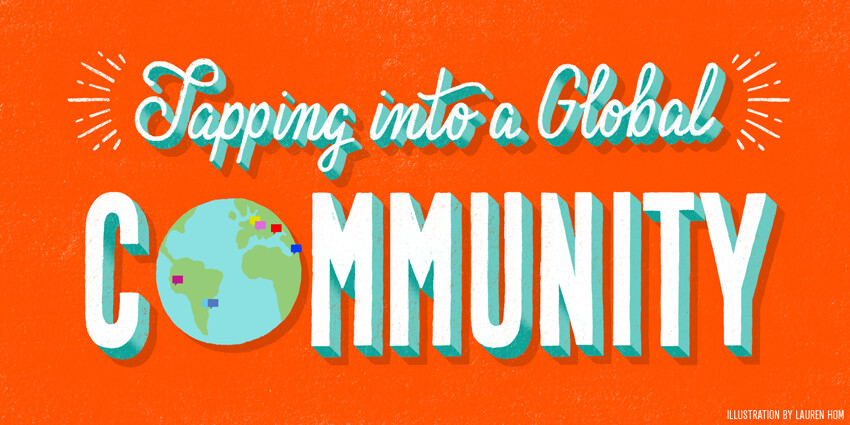 Tapping Into a Global Community

I’ve never been a morning person.

In fact, I’d go so far as to list sleep as a hobby, which makes the act of setting my alarm to wake up early no small deal.

But ever since I dragged myself out of bed for that first CreativeMornings/DC event in March 2013, I’ve found myself slowly inching towards embracing those early mornings.

I vividly remember my first event: dozens of people with beaming, caffeinated smiles buzzing about with name tags exclaiming “Warning: Morning Person!” The steam from the pour overs of local roastery Vigilante Coffee illuminated the room, and the sun poured in through the wide windows of the Gibson Guitar Showroom. Three years later, I’d successfully dragged myself out of bed early enough to check-off an additional 27 CreativeMornings/DC events. Every month, the scope and ambition of the DC chapter has grown. What started as a modest gathering quickly grew by word-of-mouth into one of the hottest tickets in town, with two hundred tickets regularly selling out in minutes. I soon became a regular volunteer to guarantee my spot, helping to greet participants at the check-in table and live-tweet the events.

Venues have criss-crossed the city, from gaining early access to the Smithsonian National Air and Space Museum to the blindingly colorful Blind Whino, a converted church that now functions as a community art space. Speakers have ranged from the delightfully hilarious Lulu Miller, the nationally renowned public radio host of NPR’s Invisibilia, who could easily have a second career as a standup comic, speaking on CHANCE; to former White House adviser Brad Jenkins and current head-honcho of Funny Or Die’s DC office speaking on ACTION. Those of us lucky enough to have grabbed the golden ticket even got the opportunity to catch a Tiny Desk Concert with Bob Boilen at NPR’s National Headquarters, who spoke on finding HIDDEN musical talent. DC was never regarded as a “creative” city, though other, less-kind words have no doubt been used to describe it. CreativeMornings/DC has helped to move that needle, highlighting the best and brightest of the city’s burgeoning creative class alongside an audience that is constantly replenished with new faces.

I’ve long been a passionate traveler, and upon a recent trip to Prague, I decided on a whim to get in touch with the local CreativeMornings host, Lada Brůnová. Along with her boyfriend Jan, she graciously spent the afternoon taking me on her own personal tour of the private parks, beer gardens and sweeping panoramic views that make up the city she calls home. It was a reminder of the global reach of this CreativeMornings community that is so often touted, yet so rarely experienced in a concrete way firsthand. Then last fall, I stumbled upon a program that seemed to promise the impossible: get paid to travel the world. The company facilitating it, Remote Year, takes 75 professionals that have location-flexible jobs to telework in a different city every month for a year. A modest fixed monthly fee covers all of the time-intensive logistics of planning a trip of this magnitude (housing, transportation, high-speed WiFi along with local networking events and programming) to allow the professionals to focus on their jobs.

Fast forward six months later and I’m currently in Montevideo, Uruguay, starting a yearlong adventure that will take me through a dozen cities across South America, Europe and Asia. And as it happens, the majority of those cities have a local CreativeMornings chapter. How could I turn down the opportunity to explore those chapters and the local creative communities that fuel them? My goals are simple:

I’ll be going to the monthly chapter events and hearing from their speakers, but also taking the time to meet the local hosts and get an authentic look at the cities they call home. I can’t wait to share my experiences with you all. And if you’re a part of these local communities, I’m eager to meet you!

You’re welcome to follow along on my personal blog, Professional Wanderlust, or on Instagram at @djwein. And huge thanks to Lauren Hom for creating the amazing header image!

haha I share the pain with you as I am not a morning person myself and everybody who knows me can testify that :) But if I could go to a DC event like this one, I would certainly drag myself out of bed earlier, probably even wearing a smile. Alright, I hope you had fun and wish to hear more news like that.