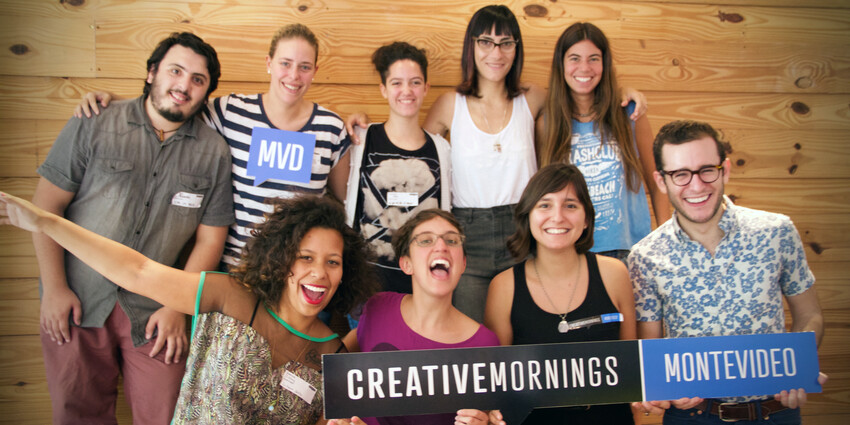 The purpose of embarking on my CreativeMornings World Tour was to explore one central question in-depth: what do creative communities look like around the world?

It seems fitting that the first stop of my CreativeMornings tour was Montevideo. In many ways, Montevideo sits at the opposite of what I’ve become accustomed to in Washington; it’s the sleepy coastal capital of Uruguay, a country whose entire population (3.4 million) barely composes one-third of the Washington metropolitan area. It’s laidback, insular culture serves in sharp contrast to the fast-paced and deeply internationally-minded nature of Washington.

Vale Pi, the bubbly CreativeMornings/Montevideo host, invited me out to meet her CreativeMornings “All-Star Team” the first night that I landed in Uruguay. I arrived to Futuro Refuerzos, a bustling sandwich shop and bar overlooking the coastline, right at the end of their monthly planning meeting, where they had been discussing ideas for the upcoming event. The intervening hours were spent with Vale drinking and learning about the local CreativeMornings chapter: how she’d first been exposed to CreativeMornings/Barcelona before returning home and pooling together volunteers for the application; that she’s already begun saving up money to attend the CreativeMornings Summit for volunteer organizers later this year; and the process of building up the local chapter to where it stands today.

If there’s one thing that I learned in Montevideo, it’s that bustling scenes like I experienced during my first night at Futuro Refuerzos are not the norm. By and large, Montevideo’s reputation of a sleepy metropolis holds true. On any given evening, residents are much more likely to grab their mate gourd and grab a seat along the coastline then hit up a cosmopolitan restaurant serving up craft cocktails.

As I quickly learned, that’s why a community like CreativeMornings serves such an important need in Montevideo: it’s one of the few opportunities for creative types to coalesce, network and learn from each other. As Vale explained to me, CreativeMornings has, in many ways, transformed how creatives in Montevideo get to know each other. It’s helped to create a centralized community where one hadn’t existed in such a prominent way in the past. When I arrived at last month’s event, held at the stunning Sinergia Cowork, I instantly felt at home. The same beaming faces; the familiar aroma of pour-over coffees. I was surrounded by a group of total strangers, and yet so many of the qualities that made me a returning participant of CreativeMornings/DC for three years were on full display despite being more than 5,000 miles away.

Vale introduced me to open the month’s lecture on Ethics, where I shared the beginning of my journey with the assembled group and explained the purpose of my #CMWorldTour. I then took my seat, making out the few Spanish words of the lecture that I understood while friends hap-hazardly translated the rest for me. Afterwards, I had no less than one dozen people approach me, eager to show me around their city and provide yet another lens through which to experience it.

The culminating piece of each stop on my #CMWorldTour is posing one simple question to each host: what about your city inspires you?

For Vale and Sofía, one of the volunteers of CreativeMornings/Montevideo, they didn’t even hesitate when I posed the question: The Rambla.

Anyone who visits Montevideo will end up coming across “La Rambla,” the avenue that spans the entire length of the 22km coastline of the city. It is a central part of Montevidean identity, and serves as a meeting point for everything from outdoor fitness classes and birthday parties to live music and other performance art. I took a stroll along The Rambla with Vale and Sofía the day before departing Montevideo, and they led me to a section with an enclosed area, full of children rollerblading and riding bikes, with parents watching on with their mate in-hand. “I love sitting here and watching people come and go,” Sofía, a freelance designer and illustrator, explained to me. “It’s the perfect place to spend an afternoon sketching and getting inspiration for my projects.”

Montevideo demonstrated to me in a beautiful way that a cosmopolitan culture or rich cultural history, like that I’ve become accustomed to in Washington, is not necessary to cultivate a creative community. To the contrary, Vale and Sofía both attest to drawing the most inspiration from the everyday things in life, like sitting along The Rambla and watching their fellow Montevideans going about their lives.

Buenos Aires is the next stop on my #CMWorldTour, and it will undoubtedly offer up an extraordinarily immersive and lively creative community that the city is internationally known for. But I’m thankful that Montevideo, with its gritty street art lined streets and characteristically subdued culture, helped frame the beginning of my adventure in an unexpected way.

I totally agree. It's a part of my morning ritual to open this site and read something interesting. I always have something to say among my friends!