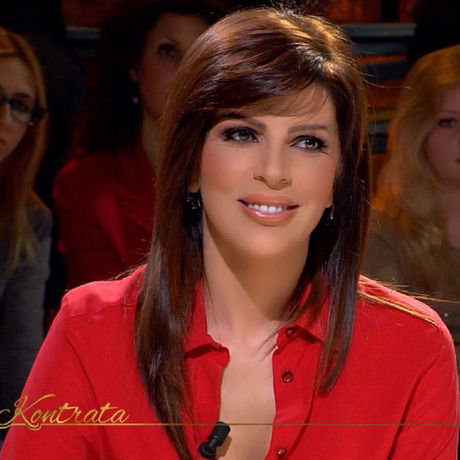 Sonila Meco was born in Tirana. She attended Secondary School in Tirana, Albania. She has studied at the University of Tirana, Faculty of Economics, graduating first in the class of 1999 in Finance. Immediately after the studies at the age of 22 she was appointed full-time assistant in the Department of Finance and Accounting at the Faculty of Economics. In 2000 she collaborated with the Institute of Contemporary Studies as external partner. A year later she started her media career as an anchor and journalist at national television TV Klan. She immediately engaged media with high success in news programs and was placed quickly on top of polls being awarded Woman of the Year in 2003. After conducting news and political programs and shows in Top Channel TV, the most important in Albania, she was awarded as one of the top five moderators in the Balkans in 2007. During that period she anchored news main edition and hosted the weekly political, social and economic talk show Logos in Vision Plus TV. In 2002 she followed the collaboration with the University of Tirana as an external professor until 2009 when she moved in this capacity in UET (European University of Tirana). In 2005 she attended the Master in European Studies at the Faculty of Philology SHPUSE. In 2008 she followed the third course of the Albanian School of Political Studies supported by the European Council. During the years 2001-2009 she followed training courses in media in the Media Institutes in different countries of Europe, but also attended the trainings from CNN and BBC. Since 2005-2015 she is the author of many successful programs with high audience as Logos in Vision Plus, Day Theme in ABCNEWS, Albanian Sunday in Klan TV, Contract and You are the Surprise in Agon Channel, being awarded for consecutive years. Apart her engagement on television, Sonila has collaborated with the most prominent newspapers and magazines in the country being author of many columns and articles. From February 2013 Sonila Meco is Director of Information at Agon Channel TV and its major image. From December 2014 she is part of Agon Italia, an Italian television channel that broadcasts in digital platform, channel 33 of Italy, being the first Albanian in the media story that hosts a daily program in Italian media market. Sonila has been hired as a consultancy expert for many different projects at institutes of economic research in the country, but also in the media. Her program, Contract is broadcasted in Macedonia in Television Art, marking the audience peaks in the media market of the neighboring country. With extensive knowledge in Media and Economics, Sonila continued the engagement on media at the same time with the academic commitment until 2010, when she decided to cover full time her career as moderator, journalist and author of television programs with the highest audience in the country. She collaborates with NGOs and other actors of civil society in the organization and running of a series of activities with focus on social issues, political, media and relevant reforms. In the capacity of a permanent analyst in the most important programs of actuality she is one of the few journalists who also holds this title. Sonila Meco is engaged in many charitable initiatives. Causes raised by her programs have changed the lives of many people in extraordinary difficulties. Due to her popularity, Sonila has been selected as image for many publicity and awareness campaigns. She is married with the Programing Director of Agon Channel TV, Drini Jasa and she is the mother of Amaris, her 5 years old daughter.