Senator Jeff Jackson and restaurateur Cassie Parsons debate the question: Why do we need to know how the sausage gets made?

Otto von Bismarck (or who knows, maybe it was John Godfrey Saxe) once said, “Laws are like sausages, it is better not to see them being made.” On October 7, 2016 – with local and national elections looming – we invited NC state senator Jeff Jackson and esteemed chef Cassie Parsons to tackle the theme of “Transparency.” And in the spirit of our democratic process, we did it as a good ‘ol fashioned debate. The two candidates engaged in an enlightening, hilarious, and mostly civil discourse on the value and challenges of being transparent in making both effective laws and delicious sausages. Enjoy! 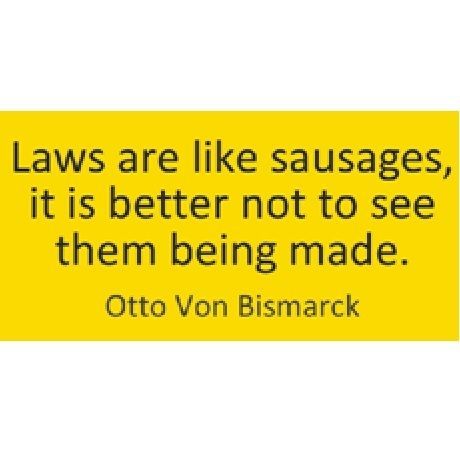 Senator Jeff Jackson‘s career in public service began after the attacks of September 11th, when he enlisted as a Private in the Army Reserve. He deployed to Afghanistan in support of Operation Enduring Freedom and was stationed in the tribal region north of Kandahar for his year-long deployment. After he came home, he attended law school at UNC-Chapel Hill with help from the G.I. Bill. Prior to joining the General Assembly, Jeff worked as an assistant district attorney and tried over one hundred cases ranging from DWI to first degree murder. In the process, he saw up close the results of too little investment in public education, economic development, and mental health care. Now the youngest Democratic State Senator in North Carolina, Jeff has helped build a bipartisan coalition to end gerrymandering, has formed the state’s first Early Childhood Education Caucus, and has introduced a number of bills to make commonsense changes to our criminal laws, including a bill that will help thousands of North Carolina citizens regain the right to drive.

Restaurateur Cassie Parsons was trained as a chef in privately-owned fine dining restaurants, hotels and health spas in North Carolina and Virginia where she cooked for more than a decade. She is known for her incredible work at Harvest Moon Grille, first with her food cart which featured 100% local food, and then at her restaurant in Uptown Charlotte, where she was Executive Chef from 2010 to 2013. Arriving in October of 2010, Parsons took a low achieving restaurant housed in the Dunhill Hotel and turned it into a national phenomenon with revenues of over 3.2 million dollars within three years. Ultimately, Chef Parsons brought her concept home to where she resides, when she opened Harvest Moon Grille on Main Street, the first and only farm to table restaurant in downtown Lincolnton.