Jeremy Bendik-Keymer Ethics in the Anthropocene

Artist Sadie Barnette and her father Rodney Barnette on creating a portrait of a freedom fighter.

Sadie & Rodney Barnette speak on how their family history was impacted by war, the Black Panther Movement, and Cointelpro. Sadie’s latest art exhibit, ‘Do Not Destroy’, reclaims and subverts the pain caused by the FBI surveillance on her father. 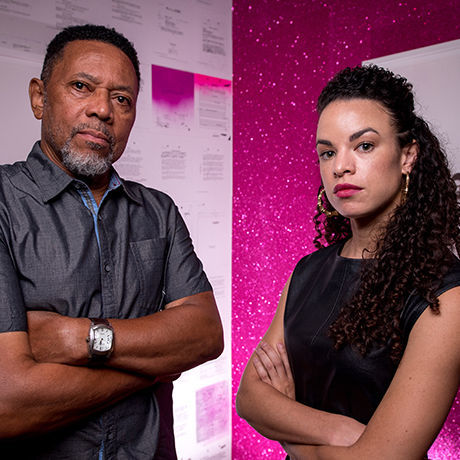 Join us in celebrating our 3 year anniversary in collaboration with Oakland Museum of California! We’re excited to have Oakland-born artist Sadie Barnette and her father, former Black Panther Rodney Barnette speak on the theme, Moments. Sadie Barnette has used the 500-page FBI surveillance file kept on her father as source material for a series of art works currently on view in OMCA’s All Power To The People: Black Panthers at 50 exhibition.

Sadie Barnette is from Oakland, California. She earned her BFA from CalArts and her MFA from the University of California, San Diego. Her work has been exhibited throughout the United States and internationally at venues including The Studio Museum in Harlem, the California African American Museum, the Oakland Museum of California, Charlie James Gallery, and Goodman Gallery in Johannesburg, South Africa. Barnette has been featured in The New York Times, The Los Angeles Times, The Guardian UK, Artforum, and Vogue Magazine, among other publications. In April, Barnette will have a solo exhibition at the Manetti Shrem Museum of Art at the University of California at Davis.

Rodney Barnette was born in 1944 in West Medford, Massachusetts, one of the oldest African-American communities in the United States. To chronicle Barnette’s years of dedication to fighting for social justice is to recount the stories of some of the most important fights against racism and state repression in the US after World War II. After being drafted and sent to Vietnam, he came home to participate in the anti-war movement, and founded the Compton California Chapter of The Black Panthers. While a college student in San Francisco, Barnette was invited to organize with the National Committee to Free Angela Davis. After her release, he turned his attention to the labor movement. In the early 1990s, he opened the first black-owned gay bar and nightclub in San Francisco.

​Stick around after the talk for a little more inspiration! All CreativeMornings ​guests will have exclusive, free access to see All Power to the People: Black Panthers at 50—closing February 26—starting at 10 am before the Museum opens to the public.

I’m trying to subvert the FBI’s language and put it into the voice of… the people, so it becomes a rallying cry that says both then and now, we will not be destroyed — Sadie & Rodney Barnette

Hosted by Oakland Museum of California