Cydney Franklin It All Comes Back to People

Norma Jeanne Maloney wanted to be an artist, a truck driver, and to marry Glen Campbell. Hey, two out of three ain’t bad.

Before she was featured in the documentary “Sign Painters,” and before she became one of America’s most respected craftswomen of an art form that has seen better days, Norma Jeanne Maloney was an untrained teenager without the proper tools required to paint a window sign for a friend. Then, quite literally, a herald appeared, and changed the course of her life forever. Her story of passion and dedication are inspiring to anyone who ever wanted to follow their calling and pursue their life’s work. 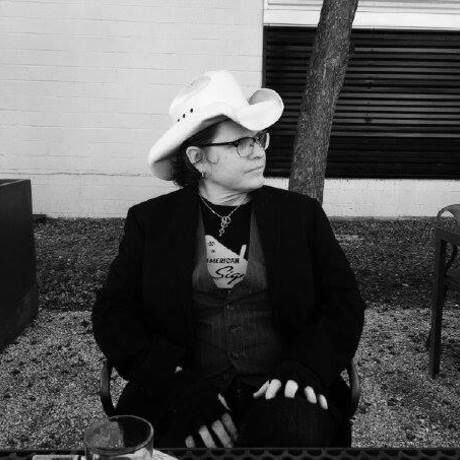 Norma Jeanne Maloney has been in love with typography, graphic design, musical iconography and paint as far back as she can remember. In 1984 when she started painting signs for the race tracks in Lexington, Kentucky.

Her Granny, Dessie Morris Spencer—a tiny and fiercely spirited, Appalachian woman—was Norma Jeanne’s musical inspiration from the beginning, forever schooling her on the history and flavor of America’s musical roots. Her mother, Stella, encouraged Norma Jeanne to explore her infatuation with form and taught her to pursue visual excellence and most of all her own happiness.

After moving to San Francisco in 1990, she attended the California College of Arts and Crafts for design. She honed her skills and found her true calling: painting signs that made her client’s business stand out among the many store fronts of San Francisco. After school, Norma Jeanne worked as a scenic for the film industry.

In the summer of 1996 she opened the doors to Red Rider Studios, a sign and commissioned works studio in the heart of the Mission district. Red Rider’s signature vintage style combined with a modern design sensibility were soon seen claiming store front windows, awnings, entrances and interiors across Fog City and the larger Bay Area.

After painting everything she could get her hands on in Nashville, TN, Norma Jeanne hit the road as an over the road truck driver and while on a stop, met the love of her life who happened to live in Austin. She followed her heart to Texas and opened Red Rider in Austin in 2006. Red Rider recently relocated to Main Street in Taylor Texas.

If you're authentic to yourself in what you do, if you do what you want to be when you grow up, you're going to be happy. — Norma Jeanne Maloney