I’m Suppose to Be Here

Mr. Soul offers his story, from Cleveland to Atlanta and how the cities artistic communities differ. Divine Intervention, and recognizing when you’re on the right path. 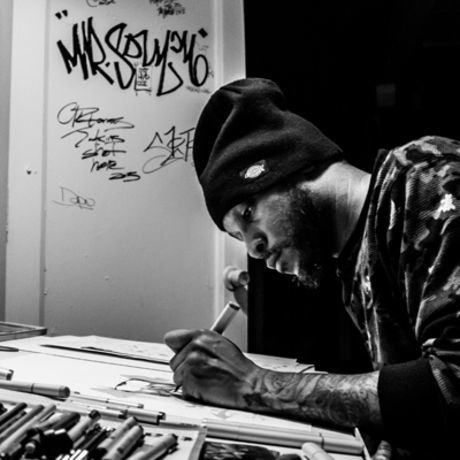 Kevin “Mr. Soul” Harp is a graphic artist, illustrator, and painter born to Cleveland’s Lee and Harvard community. He established his career in Atlanta’s music scene during the late 90’s and early 2000’s and made a name for himself as one of the most sought-after graphic artists, working with Interscope Records, Def Jam and a long list of affiliated recording artists and athletes who have grown to national and international brand recognition.

His work is informed and shaped by his childhood experience, which are familiar influences that have claimed the lives and freedoms of many urban youths. The cultural norm surrounding him at an early age was a lure of fast money gained through drug distribution, theft, and other criminal activity, but there was another driving force within him, art. He became affiliated and a member of Cleveland’s most elite graffiti crew, D.E.F. (Doin’ Everything Funky), which later evolved into C.S.T. (Cleveland Scribe Tribe) and was headed by the city’s proclaimed “king” Sano. His desires to make something of himself enabled him to break out the circle of complacency, deterred him from the many negative influences, and form a straight line to his goals.

He brought his formative artistic experience in street art with him to Atlanta and became a founding member of the art collective “City Of Ink” along with Miya Bailey, Tuki Carter and several other multi-disciplinary artists. Through City Of Ink, Mr. Soul helped to build a foundation for underserved creatives in Atlanta. Over the past 11 years through an effective grassroots movement, community and customer support, City Of Ink has become the model and central platform for people to engage in the experience and business of visual art.

Today Mr. Soul is back in Cleveland with family and with community purpose, to help create opportunities for other artists as he has done before, but now in his hometown. Among his initiatives, he has become a member of the “Support for Artists Planning Team” assembled by Cuyahoga Arts and Culture to create programs to serve historically excluded artists and their communities in the public arts funding sphere.

Mr. Soul adheres to what his childhood taught him, that the only people stopping anyone from achieving anything they want are themselves. His life speaks to perseverance, faith in oneself, and seeks to prove that the gifts you’re born with never leave you.