The Sartorial Vocabulary of Fashion

“When I was young, I decided that both of my feet had personality and feelings and that I loved them. And it was my job to be fair to each foot.” ~ Mona Lucero

Is there meaning in symmetry? We, as artists, make meaning of things, circumstances, and objects. In this talk, we will explore artist/designer Mona Lucero’s journey for incorporating symmetry and asymmetry into the meaning of her work and how it ultimately reflects the world around her. Jean-Michel Basquiat said, “I don’t think about art when I’m working. I try to think about life.” 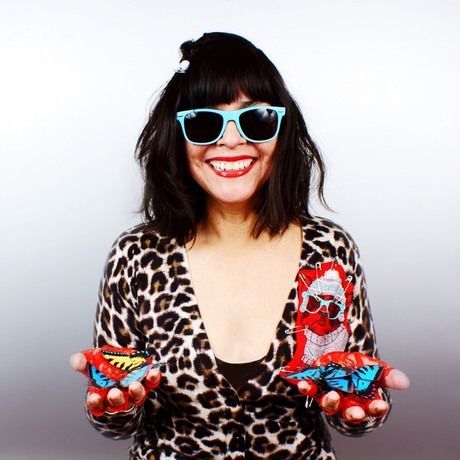 Fashion designer Mona Lucero believes in the symbiotic relationship of art and fashion.

The first thing she wanted to be was an artist. Indeed, Mona’s first memory is of creating a piece of art as a small girl. She vividly remembers drawing her sleeping grandmother’s portrait with a crayon. Voila! She thought the drawing captured her perfectly and at that moment, she knew what she wanted to be when she grew up.

In college, she became one of those art students who dressed eccentrically, mixing flight suits with fur collars, pink tennis shoes, pearls and colored hair and she avidly read fashion magazines. She realized she had found a new love in fashion design, went to design school at FIT in New York and began working in a variety of fashion industry jobs eventually starting her own line.

She believes clothing and style are ultimately about expression. It’s another form of communication and she incorporates art concepts into her designs with themes such as “Fellini-esque” and “Love, Peace & Truth”.

Her work has appeared in 5280 Magazine, City Magazine, and 303 Magazine. She spoke on 1960’s fashion for the “1968 Exhibit” at History Colorado Center. She was listed as one of “100 Colorado Creatives” and is a Fashion Mastermind as designated by Westword Magazine.

Among many unique projects, she’s created clothing for a tortoise and a hare in conjunction with a children’s book. She’s designed and created a dress on Colorado’s Royal Gorge Bridge for their “Come Across” promotional campaign and she was the subject of the short documentary called “Art & Style: Mona Lucero” which focused on a year of her life as a designer.

She’s sold her line in boutiques, had her own shop in the Lower Highlands for 10 years, and currently you can find Mona’s designs at www.monalucero.com.