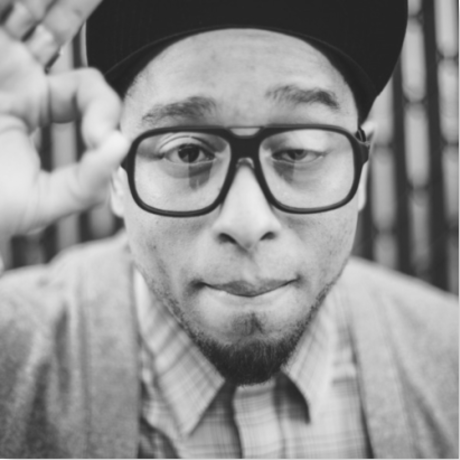 Moe Pope, originally from Boston, MA, is an indie hip-hop artist, songwriter and contemporary painter. As a lyricist, Pope chronicles the stories of his life and his community by touching upon subjects like fatherhood, relationships, and the human condition.

Pope released his first record ‘One’ in 2001 as a member of San Francisco Bay-area group Mission (now Crown City Rockers), featuring Raashan Ahmad. After spending years with the band writing and touring, he returned to Boston to be with his daughter and continue the path of performance and art.

Upon his return to Boston, he connected with rapper/producer Insight and his five-man outfit, Electric (a.k.a Electric Company) and released ‘Life’s A Struggle’ (2004). Along with Electric members Anonymous and Raheem Jamal, Pope then went on to form a music collective called Project Move, and released their debut album ‘Love Gone Wrong/Butterfly Theory’ (2006). Parting ways with Project Move in 2007, Pope reunited with former Crown City cohort Headnodic to release their highly lauded collaborative album Megaphone (2008), featuring appearances from Gift of Gab, Oh No, and Zion I among others.

In 2010, Pope collaborated with Boston producer Rain and released the critically acclaimed ‘Life After God’. The record earned a spot on iTunes Rewinds “Top 10 Albums of 2010”, Boston Herald’s “Top Local Hip Hop Album of 2010” and The Boston Phoenix “2011 Boston’s Best”. In addition, Pope was honored in The Improper Bostonian Music Issue as the “New Up and Comer” and he landed a cover and feature story in Stuff Magazine.

Drawing inspiration from a diverse background of influences, Pope spent the last few years reinventing his craft and forming alliances to inspire his work. Collaborating with Producer Rain, they released the long-awaited full-length album ‘Let the Right Ones In’ January 22, 2013 on Brick Records, to widespread critical acclaim.

In his latest collaboration, Moe Pope has teamed up with well-known producer The Arcitype (Duck Down Records) forming the band STL GLD. After releasing the album ‘MMMM’ (2014), their sophomore album ‘Torch Song’ (“Album of the Year” in 2017) paved the way for a wild ride in 2018, which saw them share the stage with the likes of Eminem, Khalid, and The Roots. Their upcoming album ‘The New Normal’ is set to release, available February 1 – is an album for our times and sets the path for the evolution of STL GLD in 2019.