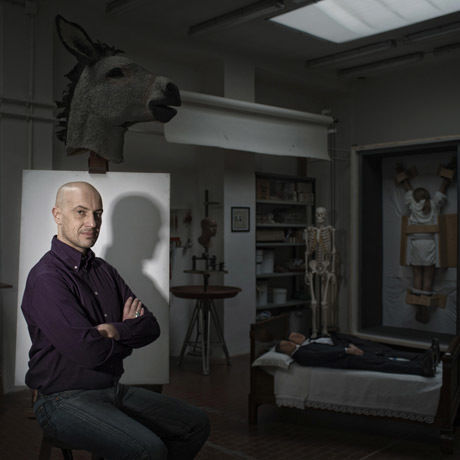 Michele Guaschino (Turin, 1966) is a sculptor with a wide experience in the sector of art and entertainment. His specialties range from anatomical and facial reproductions to works for contemporary art, animatronics, hyper-realistic sculpture and special effects make-up. The artist studied in Italy and in the United States (Cinovation). In his twenties he began working with the great quick-change artist Arturo Brachetti and with the Tony Horror Show (Luciana Littizzetto, Federico Bianco). In the meanwhile, he started collaborations in the theatre sector, working within heterogeneous partners: Teatro dell'Angolo, Marcido Marcidoris, Societas Raffaello Sanzio, Teatro Regio, Teatro Stabile of Turin, Piccolo of Milan. He worked recently with Maurizio Crozza. Guaschino’s high level technical and artistic skills and his versatility led him to work for companies such as Peyrano, Caffarel and, subsequently – through the collaboration with the Armando Testa agency – with Crodino, Lines, Fratelli Fabbri, Chiquita, Tantum Verde, L'Oreal. He contributed to various culture institutions: between 1992 and 1997 he participated, for Sergio Bonelli Editore, to the organization of the Dylan Dog Horror Fest; he looked after the composition of some areas of the National Museum of Cinema in Turin and contributed to three editions of the Experimenta Festival of popular science. At an academic level, Guaschino worked with the Department of Dentistry at the Bologna University, with the Scientific Police in Turin, with the National School of Cinema and the Egyptian Museum. The Turin Academy of Fine Arts called him to hold courses and workshops about “Technologies and cutting-edge materials of sculpture ”. The sculptor has worked and still works in synergy with many conceptual artists – Marco Boggio Sella, Piero Golia, Tere Recarens, Giuseppe Gabellone, Diego Perrone, Pietro Roccasalva, Beatriz Millar, Elmgreen & Dragset, Tue Greenfort and Maurizio Cattelan – making use of his ability to translate their design ideas and of his deep knowledge of materials for the realization of their works. Portrait by Alessandro Albert