So much of what’s built me has not that much to do with my resume, has more to do with all of you, the community.

“The Gooch” shares his journey from his roots to his current progression. From hula to cooking to teaching, his family and community keeps him grounded. 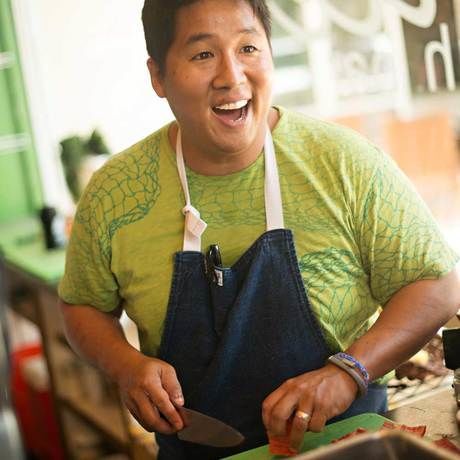 Trailblazers typically gain their acclaim through exploration of novel, unexplored territory. In local chef Mark Noguchi’s case, his most radical take – or the one that has garnered attention of the global food scene – is paradoxically a return to the most familiar of all concepts: home.

Born and raised in Manoa, Mark’s roots run deep. For years he danced hula with Halau o Kekuhi, where he cultivated a strong attention to detail and commitments to community and integrity, lifelong values that would ultimately guide his personal and professional philosophies. A graduate of Kapiolani Community College’s Culinary Institute of the Pacific and later the storied Culinary Institute of America, “Gooch”, as he’s known to friends, joined the local kitchens at Town and Chef Mavro, before pursuing a series of new ventures, including He’eia Pier General Store & Deli, Mission Social Hall & Café, Lunch Box, and the Pili Group, a catering company he runs with his wife, Amanda. Through it all, he has remained steadfast in his commitment to fostering deeper community connections through his use of fresh, island-sourced produce, seafood and meat.

In 2018, the chef returned to his alma mater and started a new role as Punahou’s first-ever Food Curriculum Specialist, where he will help guide the next generation of chefs in cooking lessons centered on cuisine’s ties to Hawaii’s land and culture. For Mark, forging new relationships to food through thoughtful conversations about its source isn’t just delicious, it’s also a recipe for something truly pono.