Holly Bass, multidisciplinary performance and visual artist, writer and director, talks to Creative Mornings DC about how to use shock to inspire. 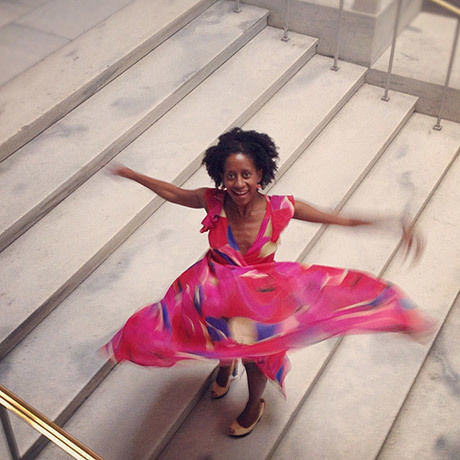 Holly Bass is a multidisciplinary performance and visual artist, writer and director. Her best known body of work explores the endless allure of the black female body—from Venus Hottentots to video vixens. Her work has been presented at spaces such as the Kennedy Center, the Smithsonian Museums, the Seattle Art Museum, and the South African State Theatre.

A Cave Canem fellow, she has published poems in Callaloo, nocturnes (re)view, Beltway, Role Call (Third World Press) and The Ringing Ear, an anthology of Black Southern poetry. From 2008-2011, she was the Cullen Poet-in-Residence for Busboys & Poets, a popular cultural gathering space in DC.

A trained dancer and choreographer, she studied modern dance under Viola Farber, as well as creative writing, at Sarah Lawrence College before earning a master’s degree from Columbia University Graduate School of Journalism. As an arts journalist early in her career, she was the first to put the term “hip hop theater” into print in American Theatre magazine. She was a founding member of DC WritersCorps and continues to work internationally as a teaching artist in schools, colleges and community centers.

In 2011, she was named one of the “Top 30 Black Performance Poets” by The Root. She was voted 2012 Best Performance Artist in the Washington CityPaper. She has received numerous grants from the DC Arts Commission and was one of twenty artists nationwide to receive Future Aesthetics grant from the Ford Foundation/Hip Hop Theater Festival. She is piloting a year-round creative writing and performance program for adjudicated youth in DC’s Department of Youth Rehabilitation Services.

Hosted by Dock 5 at Union Market