On Friday, August 5, Charlottean and Johnson C. Smith University Associate Professor of Fine Art, Hasaan Kirkland, spoke on the topic of “Weird” at CreativeMornings/Charlotte. His 20-minute talk to the crowd of 275 guests touched on everything from painting murals and teaching art, to Dune and Barbecue sauce. Get ready to discover your own “weirding way” and destroy ever obstacle in your creative path! 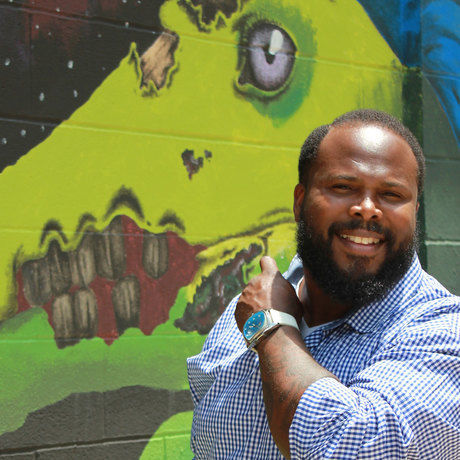 Hasaan A. Kirkland is a tenured Associate Professor of Fine Art at Johnson C. Smith University. He received his MFA from Washington State University with an emphasis in painting and drawing. Professor Kirkland is a co-founder and faculty of Johnson C. Smith Universities “Arts Factory,” an interdisciplinary Visual and Performing Art program with concentrations in Dance, Studio Fine Art, Graphic Art, Theater, Sound Art, and Film. Kirkland is the recipient of the O’Herron Distinguished Endowed Professorship, a founding charter member of the National Alliance of Artists from Historically Black Colleges and Universities, and the founder of Psi Rho Alpha Visual and Performing Arts National Honor Society.

Kirkland has been a professional artists with a juried exhibition record ranging from 1997-2016. His neo-expressive mixed media collage paintings expresses visual literacy, conceptual imagery, popular culture, and reflections of identity found in the African diaspora, African American and Popular culture. His works have traveled extensively in the Southeast region of the United States with work that has traveled to Salvador de Bahia, Brazil and Guangdong Baiyun University in China.

Prof. Kirkland’s research has been published with the Faculty Research Network at NYU, a chapter in Hip Hop Cultural Connections: Critical Explorations for the Classroom (State University of New York Press: Albany), Harvard University W.E.B. Dubois Institute African American National Biography, (Oxford University Press). His art work has been featured on the cover of Readings in World Civilizations: Prehistory to the Present and Black Vanguards and Black Gangsters: Seeds of Discontent to a Declaration of War (University Press of America), featured with Charlotte NC Pride Magazine, Uptown Magazine, A Season, A Time (a visual tribute to Oprah Winfrey published by Janelle Dowell), International Contemporary Masters, Volume Seven designed and published in California, and recently his work has been published in a course text reader titled Below the Surface: Ethnic Echoes in America’s Modern and Contemporary Art (Kendal Hunt Publishing).

Kirkland is an entrepreneur, CEO, art advocate, emerging national artist and scholar in the visual arts.

You have to be willing to be first and last of your own destiny. — Hasaan Kirkland