Frans discovered that a whole bunch of people from Utrecht would gladly visited his vision of amusement park at Utrecht’s ugliest place, the large construction site in the middle of the city. 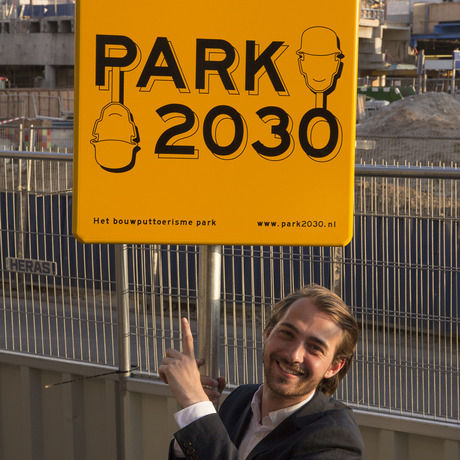 Taking a field trip to one of the ugliest place in Utrecht, the construction site around Central Station, seems like a perfect fit with this months theme of Ugly.

Frans van Ditzhuijzen studied as a graphic designer and service designer at Willem de Kooning Academie en will talk about his project ‘park2030 - construction site tourism’. A Service Design project to turn the construction site into an amusement park.

PARK2030: Construction Site Tourism When the municipality of Utrecht started the reconstruction of the entire area around Central Station they anticipated it would take them until 2030 at least to realize all of it’s ambitious plans. To gain goodwill among the residents of the city, who would be facing road blocks, deviations and general inconvenience for the next 25 years, the civil servants came up with a plan to make the construction site a tourist attraction by doing guided tours and other activities. However, as construction moved along none of the plans ever saw the light of day.

But then Frans got wind of the ideas and started his project Park2030, about which he will talk at CreativeMornings/Utrecht. Starting with an ad on Marktplaats, he received a hundred reactions of people that were interested. He then started a campaign, made plans for a guided tour in a basket suspended from a construction crane, spending a night in one of the temporary construction sheds and having lunch with the builders working on the sites.

Frans will share his inspiration, motivation, ideas and plans how designers and builders should be working together to create a better and nicer city to live in.

Exceptionally for this edition, the talk will be in Dutch - as the preference of our speaker.