Eric Cheng, one of the world’s most celebrated underwater photographers, takes us on a journey deep below the surface of the ocean to explore the worlds of the deep. 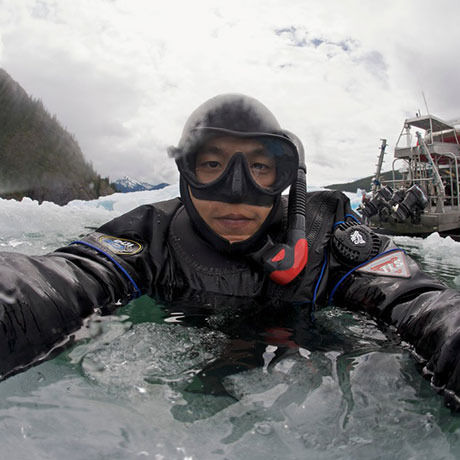 Eric Cheng is an award-winning underwater photographer, aerial imager, and publisher. His underwater images have won contests such as the prestigious Nature’s Best Magazine photo competition, which has placed some of his work in the Smithsonian’s Natural History Museum. Eric’s photography has been seen in over a hundred magazines and books worldwide.

Through Wetpixel Expeditions, Eric leads regular photography expeditions and workshops around the world. He has given seminars and lectures internationally at events including TEDx, Photoshelter Luminance, CES, SXSW, AsiaD, DEMA, Boston Sea Rovers Clinic, and others. Eric is also involved in ocean conservation, and has been on the Board of Directors of Shark Savers and the Board of Advisors of Sea Shepherd Conservation Society. He was also head photographer for Operation Musashi, Sea Shepherd’s 2008-2009 anti-whaling campaign in Antarctica, which was featured in season 2 of the hit TV show, Whale Wars.

When I first took the camera under water, I derailed my life. — Eric Cheng

There's a rule for those of us who hunt for critters. That rule is: hairy is cool and rare. Anything you see that is hairy is going to excite a diver. — Eric Cheng