Fungai Tichawangana The Hustle That Beat a Broken Economy 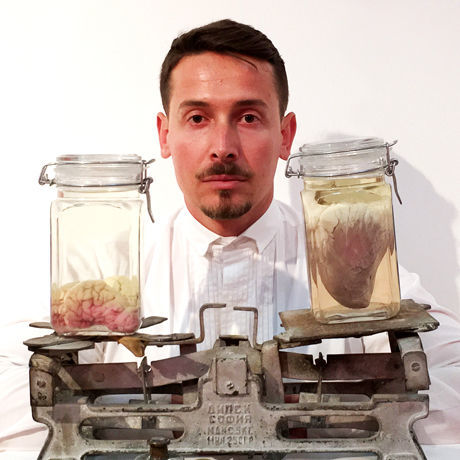 Oltsen GRIPSHI, was born in Peqin on August 10th, 1984. He is an artist, art historian and essayist. After high school graduation in the Artistic Lyceum “Jan Kukuzeli” of Durrësi he continued his studies at the painting of Fine Arts Academy G. B. Cignaroli of Verona where he is excellently graduated in 2006. In 2009, he mastered the Master Degree Post Lauream with his thesis “Illustration, aesthetic and art critique for pedagogy in iconography reading”, at the Faculty of Educational Sciences at State University of Padua, Italy. In 2012, the II Degree in Specialisation School (Laurea Doctus) with his thesis “Fine arts and show disciplines”, at the Academy of Fine Arts G. B. Cignaroli of Verona, Italy. Since 2013 he has followed studies for the highest academic Degree of PhD Graduation (Filosofae Doctor) with the thesis “History of Albanian art”, at the Institute of Cultural Anthropology Studies on Art at the Albanian Studies Centre (QSA) Tirana. From 2009-2010 Oltsen GRIPSHI has worked at State Library of Verona in the archive and restoration of the antique books as well as categorization of literary fund of “Giuseppe Tucato”. He is a teacher of Art History and Aesthetic. His artistic philosophical approach is that surreal-conceptual language, applying it with various medias such: painting on canvas, video art and installation.
In 2010, Oltsen GRIPSHI career begins with the introduction of his name in the Italian Encyclopaedia of Art, for later enriching it with the participation in exhibitions, biennales, competitions and various international events, international prizes and acknowledgments, like:

2016 - Award for Career “Canaletto 2016” in the International Biennale of Contemporary Art in the Riviera del Brenta, Padua, Italy. 2015 - Master emeritus of art and honorary member for 2015 in the National Italian Cultural Society “Italy in Arts”, Lecce, Italy. 2014 - Acknowledgement of the above International Human Rights “Nelson Mandela” in the field of art, Lecce (Italy). 2013 - Artist of deserved honor Cavour Sogliano City in 2013, awarded by the Municipality of Sogliano Cavour, League City Culture Sogliano Cavour and Regione Puglia, Sogliano Cavour, Italy. 2010 - 2015 Artist of the Encyclopedia of Italian Art, Milan, Italy.

2014 - International Special Award “RAFFAELLO SANZIO 2014”, awarded by the National Association of Italian Culture, Brindisi, Italy. 2013 - International Prize “GOLD MICHELANGELO”, organized by the Art Gallery Gadarte, Cultural Association of Florence, Magazines and Journals Over Art and Effetto Arts, Florence, Italy. 2012 - International Prize “LE LOUVRE”, the Italian magazine of contemporary art “ART OVER” with motivation “for high value creative”, Paris, France. 2012 - International Prize “NETTUNO 2012”, awarded by the National Association of Italian culture, with the motivation “for the importance of the discussed topics in the field of visual arts, the result of an indisputable intuition intellectual and cultural refinement”, Bari, Italy. 2012 - International Prize VI edition “HUMAN RIGHTS, SPARTACUS 2012”, awarded by the province and the municipality of Lecce, Puglia, with the motivation “for an important purpose of personal, social and professional to convey a universal message for Peace and Freedom for future generations ”, Lecce, Italy. 2010 - Distinguished Artist Award in artistic drawing competition “ IN PENCIL TIP PLACES, IMAGES, ATMOSPHERES, THE ACTIVITY OF VENICE OF TODAY”, organized by the State Museum of the City (Civico) of Venice, Italy.