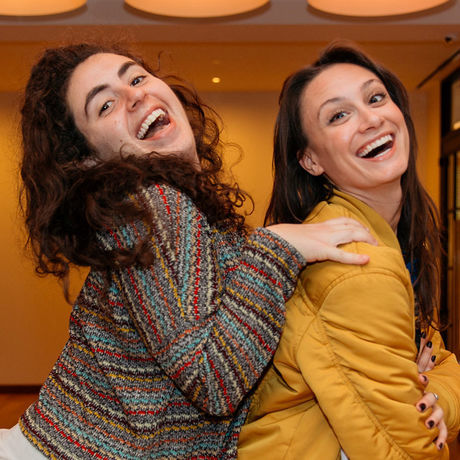 Marcia Belsky is a New York City based stand-up, comedian musician and co-writer of the hit parody Handmaid’s Tale: The Musical. Her 2016 project The Headless Women of Hollywood, a comedy blog that explores the objectification of women on film and television posters, has been featured on BBC, NPR, USA Today, Buzzfeed, E!News and more. She is a contributor to the popular satirical site Reductress, and is the lead singer of the musical duo Free the Mind whose song All Older White Men Should Die (But Not My Dad) was called the The New Feminist Anthem by Elite Daily.

She co-hosts a podcast with comedian Rae Sanni called Misandry with Marcia and Rae, and has been a guest on NPR’s Marketplace, Radiolab, Las Culturistas and more.

Melissa Stokoski is a comedian, actor and writer based in Brooklyn, New York.

She hosts and produces Bitches’ Brew, a long-running weekly stand up show, as well as the podcast Speaking of Carrie. Stokoski co-wrote and stars in Handmaid’s Tale: The Musical, which has been featured in the New York Times, Bust Magazine and Refinery 29. She is a regular guest on SiriusXM’s Radio Andy and appears every Tuesday on SXM Insight. Stokoski was on the first ever episode of TruTV’s Late Night Snack and is a freelance contributor for Elite Daily