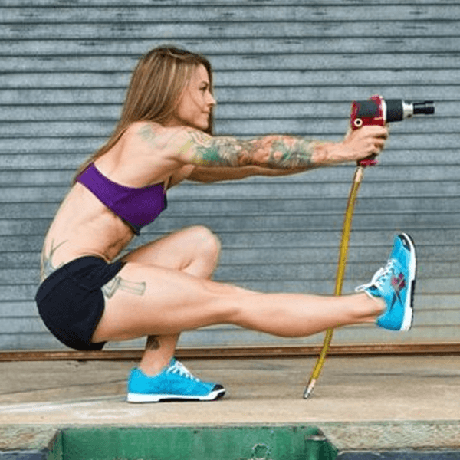 Despite a modest frame of only 5 feet, 3 inches and 118 pounds, Christmas Abbott boasts quite a body of work. A business owner, CrossFit competitor, Olympic Lifter, Head Trainer and most recently a NASCAR pit crew front tire changer, Christmas displays a balancing act that a few could execute with such charisma.

A native of Lynchburg, Virginia, Christmas has not always lived a life where fitness and wellness were as important as they are now. Christmas describes her teenage self as a smoker and slacker, citing a brief stint in middle school athletics as her only precursor of fitness. It wasn’t until an experience as a civilian contractor in Iraq during her early 20’s that she found inspiration to change. It was there that she discovered CrossFit, the springboard to the accomplishments she is most famous today.

Upon returning from overseas, Christmas curbed unhealthy habits, drastically altered her lifestyle and physique and opened what now is CrossFit invoke in Raleigh, North Carolina. Since beginning CrossFit, she has become a member of the highly-respected CrossFit Headquarters Seminar Staff and led her team to the Mid-Atlantic Regionals for the CrossFit games for the past three years, including two qualifications and trips to the Reebok CrossFit Games.

In 2012 Christmas embraced a challenge to change tires for NASCAR pit crews. A mostly unexplored world for women, she is already rising in the ranks of the sport’s elite, signing to her first cup-level team, Michael Waltrip Racing, within months of changing her first tire.

December 2013 Christmas became nationally ranked as an Olympic Lifter at the American Open. While she had qualified the two previous years this is her first year to compete. She looks forward to climbing the ranks of her 53Kilo weight class.

If you fail at something and you truly attempted it, it's still a success. You're just going to have to do it a few more times. — Christmas Abbott