Brett leads us into a future that is rapidly evolving and explored every day in the realms of virtual and augmented reality.

What happens when we find ourselves in an unbelievable situation, jaw wide open, with our senses on fire because we cannot fully understand what just happened? Half of us are going to shun it away and look for reasons not to participate. The other half will embrace this new river into our understanding of what this new reality means for all areas of our lives. Go down the rabbit hole with Brett as he leads us into a future that is rapidly evolving and explored every day in the realms of virtual and augmented reality. 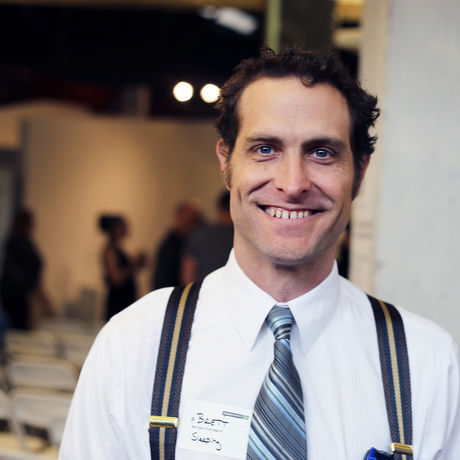 Powerful creativity is born when we can imagine the possibilities from on-hand materials. In Brett’s world these materials include pop culture, media, technology, and entertainment. As a futurist, Brett is brought in to help corporations see what is coming in these areas so they can prepare programming, marketing, and the unimagined into their planning cycles early enough to be on time.

Brett is adept at traveling deep into the rabbit hole of technology or far out into the universe of the mind. Originally a computer scientist, Brett quickly turned toward world travelling religious philosophy and achieving World Champ status in Ultimate Frisbee. Since settling down in Black Mountain with his wife and three children, Brett has focused his attention on the art of stories in all their many shapes and sizes.

In the last ten years, Brett has been all of the following:
-Producer and Director of his documentary The World in One Beach
-Director of Design and Technology for HATCHAsheville
-Executive Director of TEDxAsheville
-Futurist to Turner Broadcasting via Native Marketing
-Game Designer as Sheepsknuckles
-Head Coach for the first Professional Ultimate Frisbee Team in Charlotte, NC
-Emcee at 5-Point Film Festival
-C-3PO at Spoken Word
-Currently as Creative Director for UGoTour