The foundation and beginning of Floyd 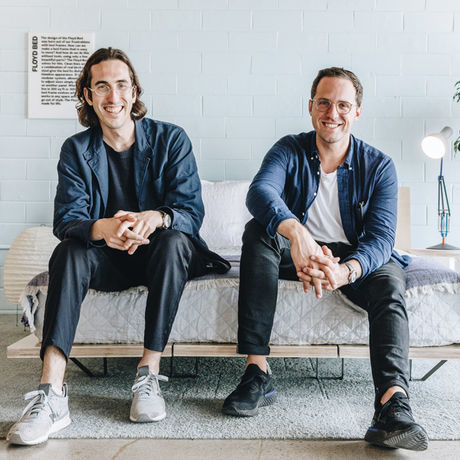 Alex studied Public Policy at the University of Michigan, and also spent time in Boston as an intern at the Berkman Center at Harvard Law School, driven by an interest in international diplomacy. However, he found more of an entrepreneurial and creative itch to build projects from the ground up, and while at Michigan launched the University’s first TEDx series, leading a team of 15 that drew 1,700 attendees and raised $50,000 in its second year. Recognizing a healthcare opportunity with growing mobile phone access, Alex spent time in Mumbai creating an audio-voice based mobile health information app. He later lived in Istanbul, where he made a short film about migration between cities. At Floyd, Alex works to align partners and team members around growth initiatives to build Floyd into a leader in furniture. He leads marketing, brand, the e-commerce experience, and finance.

Kyle pursued architecture and entrepreneurship in his undergrad and has a Master’s degree in architecture from the University of Michigan. Although Kyle worked for architecture firms in San Francisco and Chicago after graduation, he relentlessly pursued launching his own business, working evenings and mornings. While moving between cities, he realized that traditional furniture didn’t work for how he was living — a pain point he sought to solve. While in Chicago, after spending a weekend attempting get to IKEA, Kyle set out to develop a better design & experience. After cold-calling dozens of factories in the Midwest & getting turned down, he finally had a prototype for the first product: a set of table legs that packed up easily & allowed an individual to create a table with any surface. At Floyd, Kyle leads vision, as well as driving supply chain growth, product development, and strengthening Floyd’s manufacturing partnerships.