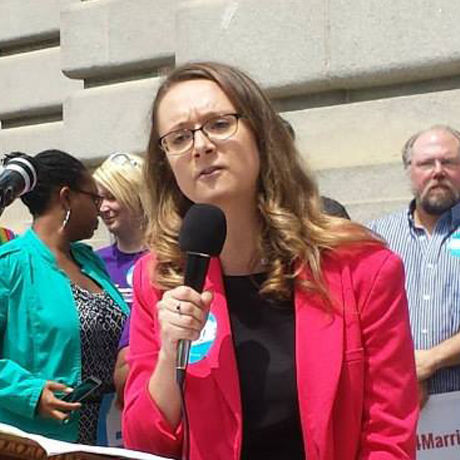 Alana Jochum is an attorney and Executive Director of Equality Ohio. She received her B.A. in English and B.S. in Psychology from Baldwin Wallace University in 2005. She has been passionately engaged in the fight for LGBTQ equality at the local, state, national, and internati`onal level for more than a decade. After college, Alana traveled to Mumbai, India to volunteer with the Humsafar Trust, a nongovernmental organization working to advance LGBTQ equality in India. After returning home, she worked at United Way of Greater Cleveland and continued her LGBTQ volunteer work through the Human Rights Campaign. In 2007, Alana attended Cleveland Marshall College of Law where she served as Editor in Chief of the Cleveland State Law Review. She became an Associate at Squire Patton Boggs, LLP in 2010 where she focused her legal practice on complex civil litigation, international law, product liability disputes and other commercial litigation. She also represented clients in habeas proceedings before the Sixth Circuit and at the District court level. Alana left Squire in 2014 to work with Equality Ohio full time where she has the privilege of advocating for LGBTQ equality statewide full time.

Hosted by The Village Stage