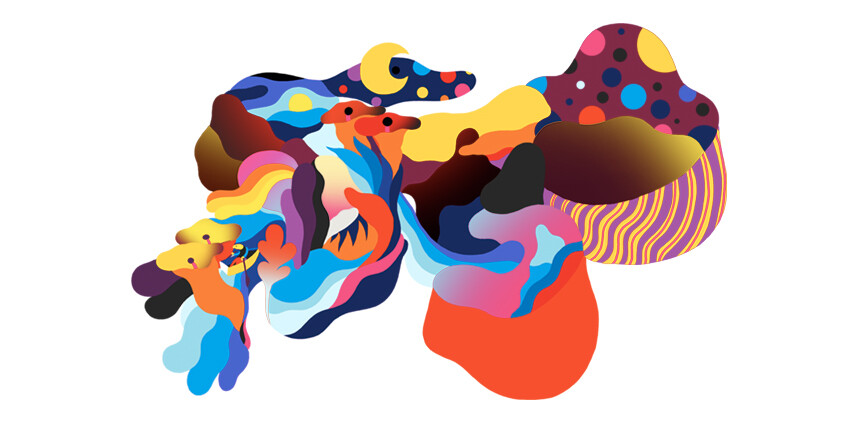 It has been a tradition at CreativeMornings to work with an artist in our community to create an illustration for the monthly theme. March is all about Taboo.

The illustration is everywhere — in 160+ chapters’ social media channels and at the events.

David Stenmarck lives with his wife and three kids in Ås, a small town outside of Oslo, Norway. He graduated at the University of South Australia in 2004, and proceeded combining visual communication and illustration with lots of different work and projects. David work as an illustrator, a photographer, and builds climbing walls. He also make music videos and decorates large surfaces.

Thanks to one of many cool art projects, Åkebakkveien 16, it allowed David to work with CreativeMorning/Oslo’s very own Liz Ramsey, which made this collaboration possible! When it comes to doing illustration work for others, I remember getting small requests at junior high school. I then continued studying drawing and painting at high school, while getting small jobs drawing flyers, painting walls, and some art projects. How would you define ‘taboo’? What does that mean to you?

Taboo for me is defined within culture. Depending what culture your in, or what vision you support; religious, geographically or environmental. And is often based on the lack of acceptance. I have always been into drawing and creating visual stuff. At high school, I started being able to make some money of it. I guess those years defines the beginning, before that I only did it for fun.

I have had lots of different drawing styles. Probably because a lot of the artists that inspired me obviously was such a big part of many of my drawings. The inspiration made me create a lot, and over time develop my own versions of different styles. I have always been a huge fan of painting big, which in the early 90s naturally introduced me to spray cans. When I got my Wacom Cintiq in 2008, it suddenly made the connection between painting big on a wall, and painting almost the same way, only small, on the drawing pad — a very natural start to the way I have been drawing ever since. I always have a bunch of fun collaboration projects besides paid commissions. These projects tend to loosen up unwanted habits and make way for new opportunities. I also try to do projects that involves something else then drawing, but I always bring my sketchbook. Ås is not a city, it is a small place that mostly has everything without having to much. The people here are great and the landscape is very flat. But it is not good for cross-country skiing, it rarely has enough snow. Me and my wife built our own house, and we have 2 cats. One of them is called Hans even though she is a girl. Check out more of David’s work on his website.