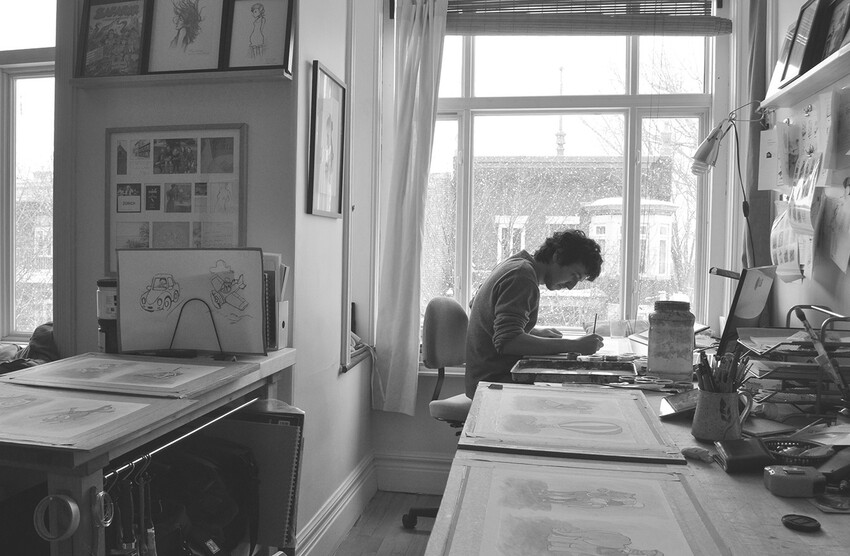 Every month, CreativeMornings works with an artist in our community to create an illustration for our global monthly themes. Our monthly themes help spark new conversations and ideas at our events. Speakers around the world are invited to share a story around the theme and what it means to them.

Our global theme for January is Roots. Our first artist of 2020 is professional painter and illustrator Félix Girard. Given that these illustrations are at events all around the world, it’s only right that we get to know the illustrator.

Félix Girard is a professional painter and illustrator from Quebec City, Canada. Born in 1988 in a family of painters, Félix learned to draw and to paint mainly by spending time in his family’s studio.

At the age of 18 years old, he started his first series of solo exhibitions that were successful and gave him the opportunity to completely devote himself to painting. After those exhibitions and thanks to an agreement with a Quebec patron, he left for Lyon, France, to make a living through painting. Felix has been working full-time as a painter and an illustrator since then. He has worked on an impressive number of projects in various disciplines and has been published many times around the world.

Back in Quebec, Félix started his studies in architecture at Laval University and completed them as an exchange student in Tampere, Finland, in 2011. Most of his world was formed during his early childhood, which is why he mostly draws inspiration from that time and things related to it. What was it like spending time in your family’s studio as a child? In what specific ways did the experience shape you?

My family’s studio was really my playground as a child. Instead of toys, I spent a lot of time playing with paint, brushes, pencils, and various materials.

My parents were both painters, but we had a lot of other materials in the studio to explore with: wood, cardboard, leather, fabrics, etc. I discovered the pleasure to create and to craft with pretty much everything available around me. At some point, I even made myself a blacksmith forge from an old BBQ using a drying machine motor to be able to play with metal.

The main important thing that I learned as a child is that there’s no limit to what you can create.

You’ve traveled all over Europe while also making a living as a painter. What were some memorable lessons learned during this period?

I had a lot of luck at the beginning of my career being supported by family and friends. I was only 18 years old when a family friend became aware of my work as an artist and wanted to give me a big opportunity: he proposed to commission me two paintings a month for a year in exchange of a small salary. He knew that I wanted to visit Europe and this gave me the chance to go there and to live from my art for a full year.

So I landed in Lyon, France and divided my time between painting and discovering new things. During my trip, I visited a large number of museums and cities around Europe and learned of lot by experimenting and observing. This was really an exciting time that had a big influence on my style and on what I do today as an artist. Even though it wasn’t a “course” in an academic sense, I feel like I learned more there than I could ever learn sitting in a classroom. What an incredible experience. When you returned to Québec, however, you did end up going back to school. What made you interested in pursuing architecture and how did it influence your artistic style?

When I came back to Québec from Europe, I decided to start my studies in architecture at Quebec’s Laval University because I wanted to further develop my knowledge and give myself a proper structure. Even though I was still considering myself a painter, I became really interested in architecture while wandering in Europe.

I was very interested in many kinds of craft as a child and I saw architectural studies as a way of combining many of those interests. Whether you use concrete and wood or paint and color doesn’t make so much of a difference. The creative process remains pretty much the same. Even though I don’t practice in architecture anymore, I learned in school a lot of new tools that I still use in my artistic work and it had a very positive influence on my sense of structure and balance.

What you really learn in architecture school is how to take a number of constraints and build a simple and elegant solution from them.

Your work is very much anchored in the themes of childhood and nature. How did you go about interpreting January’s theme of Roots?

[Childhood and nature] are my big inspirations when I try to create something that is meaningful to me.

The house I grew up in was in front of a big forest that belonged to members of my family and I spent a lot of time playing there, dreaming up all kinds of whimsical imaginations. Unfortunately, it was unfortunately destroyed a few years ago because of a road enlargement… but that house is still where my roots are. My memories there, of course, carry a kind of nostalgic feeling, but they also give me strength and stability in my life.

For the theme of Roots, I wanted to show that you can always grow back from where you belong even though you’ve been separated from it: the new tree growing up of a stomp represents this idea.

What rituals or things make you feel “rooted” or “at home?”

I’m really a stay-at-home person now and I especially like the fact that my workshop is just upstairs at our place. I like the calm and the loneliness in my workshop during the day, but only because it is complemented by our busy life as a family.

I have two children now, a four years-old girl and a one year-old boy, and I’ve found a lot of joy in the idea of building a place that will also become their own “roots.” We just spent the whole summer re-modeling the house with help of our family. Even though it was quite exhausting (and it’s not over yet), I feel that the goal of building a comfortable nest for them is worth every effort.

What’s the creative scene like in your city or region and how has it influenced you?

Québec is a very creative place with musicians, painters and artists of various kinds at every corner. This is especially true in the neighborhood I live in called Limoilou.

Ten years ago it was still a relatively poor place with not much to do, but it’s now becoming very trendy and lively. I feel like there’s a lot room for creativity here and people are truly open to it. For example, a local brewery here (La Souche) recently asked me to illustrate all their bottle and cans (we have made more than sixty designs now). They gave me pretty much a “carte blanche” and the result is amazing; you can now see works of art everywhere in groceries and beer stores and people are even collecting them. For this year, I would like to create a new series of personal paintings alongside a few personal projects. I’ve been doing a lot of commissioned work the past few years and even though I like it and will continue to take commissions, it feels like I need to do more personal work in order to keep a good balance. Otherwise, I tend to forget what I really want to do as an artist.

Among other projects, I also have a children’s book underway and I’m currently working as an art director on a short movie.

Thanks for sharing! It sounds like you have a lot of exciting things on the horizon. Lastly, tell us something about yourself that we can’t find online.

For many weeks, it’s been hard to stay in front of my computer or my painting table everyday. So, I really need to have other kind of projects going on in my life at the same time.

Re-modeling my house, over the past few months, has been a good way of practicing other skills and muscles. Usually, after a few days of doing other things, I feel more creative and more productive in my artistic work. We really appreciate Félix for setting aside time during the holiday season. Note: Some interview questions and responses were edited for clarity and readability.