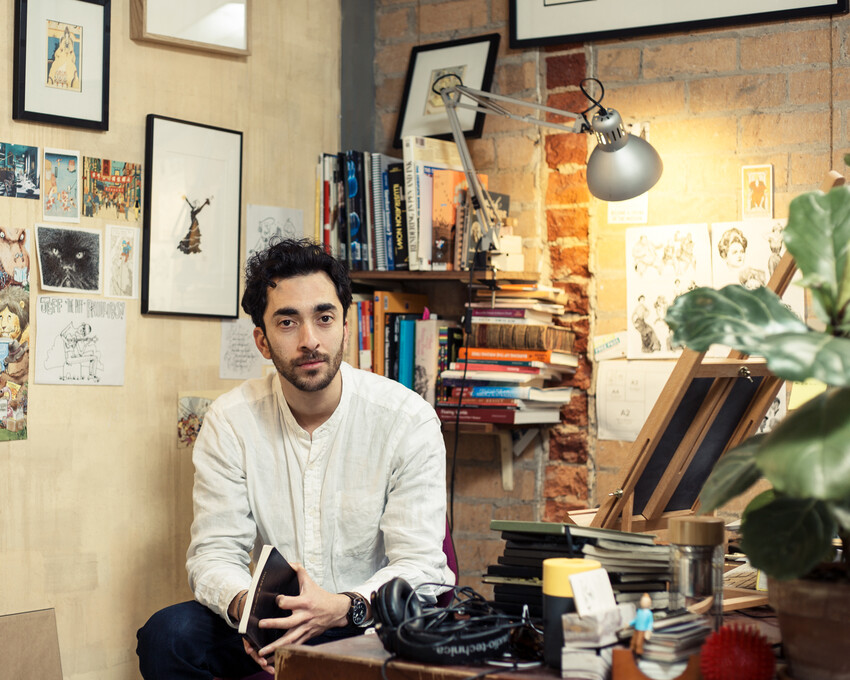 The global theme for April is Game.

Jeffrey Phillips is an illustrator. He starts every day by cooking a 7-minute boiled egg. After a lifetime spent eating breakfast, many egg-related discussions with colleagues, and some hypothetical research, he’s confident that cooking an egg for this amount of time results in the perfect egg.

Outside of the kitchen, Jeffrey extends this precise nature to his work as an illustrator. Did you know there’s a difference between a furrowed brow and slightly raised brow? One is generally curious, the other generally skeptical. Jeffrey is both.

Originally from India, he moved to Australia when he was a young teenager. Things were different in his new home and so he decided to record them. Two decades later and he continues to draw the little things in life that mostly go unnoticed with candour and humour.

Jeffrey Phillips has contributed commercial and editorial illustrations to many publications who have asked him for drawings. He’s also probably drawn you while you were out eating eggs for brunch. Ha! Illustration has been calling my whole life. I just screened that call for about 25 years :(

Jokes aside though, the thing I know now is this: What was calling me wasn’t a career. It was the self I wanted to be. The career was simply the vessel that got me to where I wanted to get to.

I entered the game much later in life (mid to late twenties) so I’ve always had this hunger to make up for lost time, and imposter syndrome pushing me to constantly ‘prove’ myself.

When I was about 25 years old, I had resigned myself to an unfulfilling and unremarkable career in the financial industry. One fine morning my bosses realised I had zero ambition (or maybe they discovered my stash of doodles on office stationery) and sent me packing. It was just the kind of kick up the ass I needed.

From there I enrolled into a Design and Multimedia course (of course). I took on pretty much whatever creative work I could find while studying. I did caricatures at parties, storyboards for student films, event posters, album art and for a while I was a court sketch artist.

Eventually it became too much to handle and I had to drop out in my second year. Thankfully all those little side jobs had quietly turned me into a total wheeling dealing freelancer.

I’ve now been freelancing full time as an illustrator for about seven years. I’ve always been a bit of a quiet observer. At some point I began to turn these into drawings. Little sketches of life unfolding around me, tiny slices of time, moments of quirkiness, things overheard etc.

I think I have evolved as a person through this practice. It requires you to be so present, at peace with yourself - not that I always am, but it helps. It’s almost meditative. It’s funny but I sometimes think that as my drawings evolve, they change me too.

How do you interpret ‘game’? What role does this concept play in your life?

For the theme illustration I set out by making a huge list of meanings of ‘game,‘ e.g, to have style, to put balls into holes, large animals that people want to shoot, etc.

Ultimately I decided to explore interpretations of game that are more open-ended and playful. Funnily enough, trying to use the letter shapes of G A M E to express this was a bit like a game itself.

Pretty much anything can be a game if you approach it from the right angle. It puts a bit of cheeky fun back into routine things.

My favourite games are often ones that need no props to play.

For example when I’m out taking a walk with friends it’s fun to take turns spotting something interesting along our route.

“The top of that chimney looks like a toaster”

“Both those magpies only have one leg each”

You get the idea… What advice would you give to fellow illustrators

“Motivation gets you started, but routine gets you to the end”

This is some of the best advice I was ever given by a dear friend.

If you’ve ever gotten really hyped up over an idea or dream only to have it fizzle out a few weeks later you know what I’m getting at. It never lasts.

But channeling that initial energy into creating a routine that helps you chip away at your goal? That keeps you going for so much longer.

My friend Madeleine has a great blog that is all about routine-inspo (www.extraordinaryroutines.com)

What’s something in your industry that deserves more attention?

That our devices are just way to good at stealing our attention away from the things that matter to us. It’s a daily struggle for me to avoid falling down the slippery slope of checking my messages, checking my feeds, etc.

I think it’s important because we are creators – and creation requires minds that are not held captive. Our minds, our ideas and our thinking are our biggest strengths.

If there was one thing I think deserves more attention, it’s breaking free of all that. So we can get back to serving the world in a positive way, something that is infinitely more deserving of our attention.

This is a bit gross, but I severed my left thumb during a wood-working class in high-school. Thankfully they managed to re-attach it with a bit of wood-glue and sawdust. You can hardly tell. It doesn’t work as well as it used to, and it doesn’t do any cool party tricks, but I get by — lucky thing I’m right-handed I guess.