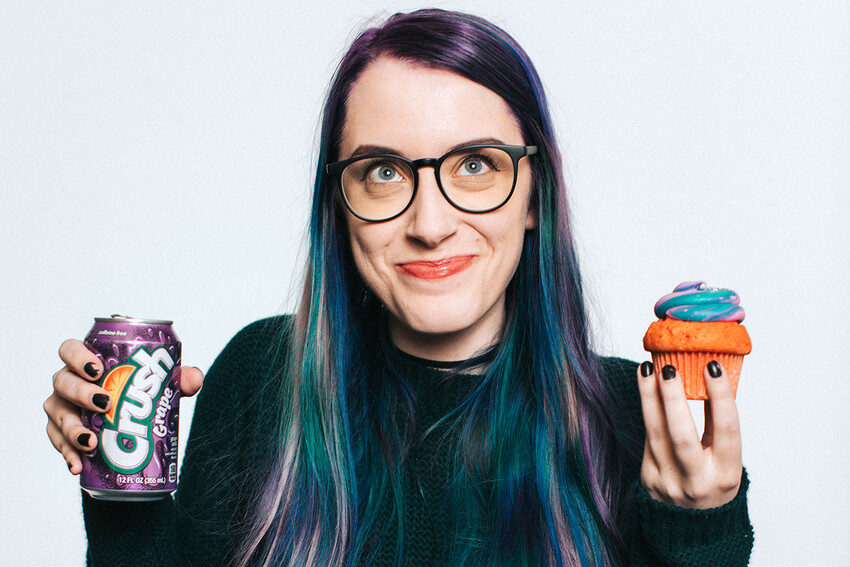 The global theme for November is Death.

Syd Weiler is a visual development artist, illustrator, animator and partnered Twitch Creative streamer. She was a 2016-2017 Adobe Creative Resident, during which she grew a creative community through streaming. She created the viral internet character Trash Doves, a digital sticker pack for iOS, licensed by Facebook. She helped develop and kickstart Jenny LeClue, an interactive choose-your-own-adventure mystery game, releasing 2017.

I wish I had a fancy answer or fun childhood story for this one, but honestly, I switched college majors from animation into illustration after flunking out of the first thing!

I leaned into Visual Development and children’s work within my portfolio, and was picked up on my first major professional project within the year, an indie mystery/adventure game called Jenny LeClue. Kept going from there. When I failed out of Animation, and Illustration was the nearest major credit-wise at my college, not restarting a new degree plan three years into it felt like a pretty good calling.

I started loving it and truly understood that I could be doing it for a while once I revivied my teenage love of drawing and started seeing my work used for practical application. I love experimenting and creating work for myself, but nothing can quite summarize the feeling I get when I make somthing that successfully communicates an idea using shapes and colors I put together. It’s like knowing a language whose rules you kind of get to make up! Of course, my work has evolved a lot in the last few years! I haven’t been doing this for long, but I’ve been through a lot in that short amount of time. Instead of nitpicking each one or overanalyzing any sort of period cycle, I’ll say that my interest in nature is my foundation. No matter what goes on, I know I can reground by simply being alone with myself outside, or near plants or animals. I think that shows itself throughout my personal work. It’s enough to want to make good work. The importance of the work will find itself later.

Keep a hobby outside of your work - that’s an important one - it can be literally anything! In many of our cases, our hobby became our jobs, leaving something of a void. My work started improving greatly when I had something else to do with my hands that was not tied to my income source.

Oh, and find yourself a great therapist. :) When you think about death, what comes to mind? How does it influence your life and work?

This is a complicated personal topic right now, as someone very close to me is dealing with a debilitating disease. I witness first-hand the fragility of our species every day. However, I’m constantly reminded to look at it on a larger scale - death is a part of life. It comes in the cycle. No matter what you believe happens before or after that, it’s a fact. I personally find a kind of solace in that dark certainty, and being at peace with it allows me to be more objective about how I spend my own time here on Earth.

Since this is the last question and it’s close to Halloween, let’s go out with a creepy bang. I used to breed and maintain a colony of around 300 Madagascar Hissing Cockroaches. They were the loves of my life and I have been thinking about getting some more soon. I just answered the death question partly by saying that I like to choose what I do with my time… 9 times out of 10, I’ll choose to spend it with bugs. Facts!