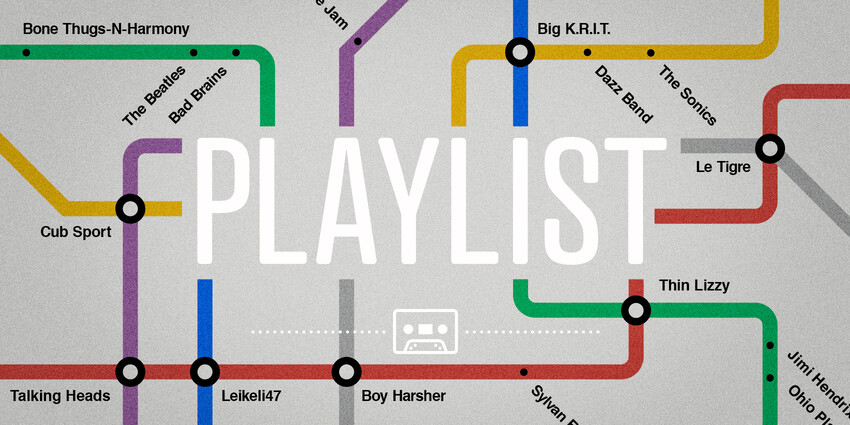 The theme this month seems like a bit of a tease in the time of COVID. Transit is the theme. I don’t know about you, but I haven’t been getting out and about too much lately. It has been a while since I have used any kind of public transit or moved about with any level of abandonment. I’m longing for the day when I can once again confidently, (albeit never comfortably), get in a plane and go off to visit far away places. The virtual has replaced the physical in so many ways, but you just can’t reproduce the feeling of being immersed in a real place.

So then let’s take a virtual trip, one that is purely auditory in nature. We will travel through sonic destinations both familiar and strange. These tracks are not for riding — we have more than two to keep us on the rails, over 40 in fact. From the rambling rhythms of the Grateful Dead to the dark distant locomotion of Boy Harsher to the driving discofunk of the Ohio Players, we will hit all the stops. Follow Big KRIT to Outerspace, or maybe walk with Georgia Anne Muldrow, Zoom around town with Leikeli47, or take a Subway Train ride with the New York Dolls and if you happen to need a Metrocard, Le Tigre’s got you covered. Where you get off is up to you. Next stop Cleveland?

Horror bluesman Screamin’ Jay Hawkins, post punk pioneers Pere Ubu, alternative rapper Kid Cudi, folk songstress Tracy Chapman, skate jam goovers Dazz Band, sing-song rappers Bone Thugs-n-Harmony, and backwoods rockers James Gang all have one thing in common, aside from being great, they’re all from Cleveland. Also, they are all included in this month’s playlist among a few others. Bonus points if you can find all the Clevelanders. As you may have guessed, this month’s theme was selected by the Cleveland chapter.

Home of the Rock and Roll Hall of Fame, the city has quite a deep history in music. Cleveland is known as the birthplace of rock and roll. And while the term rock and roll had long existed in blues music as a euphemism for sex, it was Cleveland record store owner Leo Mintz, who in the 1940’s, first use the term to describe Rhythm and Blues music. It was an era of overt racism and segregation, local radio stations would not play music from black artists, and the term helped obfuscate the origins of music. Mintz enlisted Akron disc jockey Alan Freed and the two went on air with a rock and roll formatted show called “The Moondog Rock and Roll House Party”. Now the myth perpetuated is that Alan Freed saw that young white kids were dancing to this music in Mintz’s record stores and boom he created “The Moondog Rock and Roll House Party” in response. But as Tom Feran wrote in the Cleveland Plain Dealer, it was actually Mintz who picked the records for those early shows and he was trying to reach his customers, older hip black listeners, the fact that young white kids also responded was a happy accident. With the success of the radio show growing, Freed eventually began hosting dances with live performances from the bands he would play on the show. The most notorious being the "Moondog Coronation Ball”. The 1952 Cleveland concert ended in complete disaster after 20,000 kids showed up to a venue that could hold only half that number. Fights broke out, police clashed with concert attendees and the scene devolved from there. The “Moondog Coronation Ball” was promoted with the cheeky line “The most terrible ball of them all”, but in the end the hyperbole was true. It was a chaotic event, but it put rock and roll on the map. The Moondog radio show amplified the vibrancy and energy of rock and roll music and sent this new sound into the living rooms of unsuspecting Ohioans. I like to imagine radio signals blasting out from Cleveland to the rest of America planting the seeds of nonconformity and creativity into the brains of America’s youth. Cleveland rocks.

Well I guess that’s it from me. I really can’t wait until we are past this social distancing business. Remember when we used to get together, pack into small spaces, listen to really loud music and move around like we couldn’t control ourselves? That was weird… but cool. See you on the other side.

I’ll be back next month with another playlist. Thanks for listening and If you dig these playlists, follow me on Spotify and give me a shout on Twitter, I would love to hear from you.

loved reading it and get some good things to implement too. Keep sharing. Printonlinestore