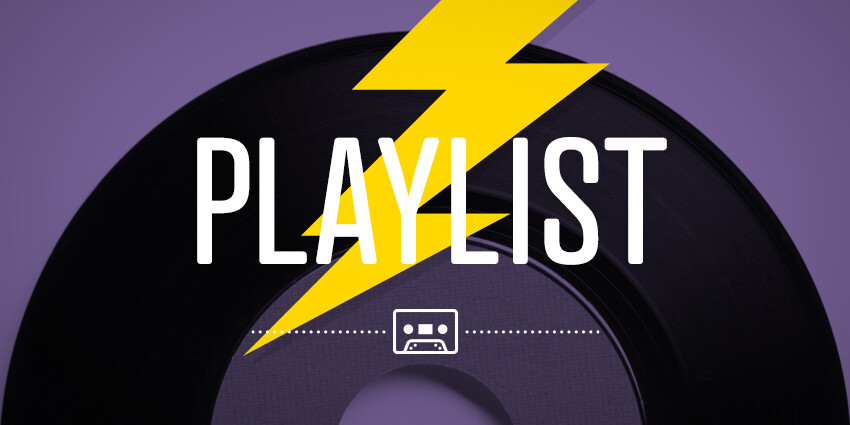 When I think of Shock, I think of a jolting or arresting sensation. Inspiration is like that, you get a great idea, or see something that gets your mind going and your adrenaline flowing and then before you know it, you’re in motion, inventing, creating. It’s like a spark. Those moments are magic. A shock, good or bad, seems to expand your mind. It’s the unexpectedness that makes it so visceral. I’m sure there is something happening physiologically as those neurons fire off electrical signals, zap zap zap.

The Shock theme ended up initially skewing my playlist towards a lot of heavy metal and hard rock. I’m a metal fan, growing up in Ohio, I was into all types of metal, from the first wave British metal bands, (Iron Maiden, Judas Priest, Motörhead) to thrash (Slayer, Metallica, Megadeth, Anthrax) to even hair metal (Mötley Crüe, Ratt, Hanoi Rocks). I loved it all. I think it was all the shocking imagery and evil themes, I liked that it scared the adults. But I know metal isn’t for everybody, so I diversified the playlist to be more inclusive of other genres and eras. Make no mistake though, there are still a number of great rockers included.

AC/DC is awesome, that’s just a fact. The Bon Scott era records in particular, are packed full of bad-ass rockers. High Voltage is a great example, with it’s bare-bones riffs, no frills back beat and Bon Scott’s vocals oscillating from casual to frantic. It all mixes together to make a great rock-n-roll anthem…“put this one in your fusebox!”

Kiss’s, Shock Me, off of the Love Gun album, is a great Ace Frehley led track. People are split on Kiss, the critics generally don’t have much regard for them. I really enjoy them, but I think you have contextualize them to really appreciate them. They were really a band for young teenagers in the mid 70’s. Kiss mixed rock, horror, fantasy and comic books, into a potent amalgam that resonated amazingly with the youth. I was a little too young to really experience the Kiss movement in all it’s glory. Kiss built an impressive empire with music, movies, lunch boxes, action figures and a theatrical live music experience. They were more than just a band, they were an institution.

Sweat Shock by J Roddy Waltson and the Business is a clear homage to Led Zepplin. It’s particularly similar to The Wanton Song, but it is reminiscent of any number of late 70’s era Zeppelin tracks. It’s a great song in and of itself and impressively faithful recreation of the Zeppelin sound. I will say it’s missing that unmistakable Bonham swing though, I don’t think that’s reproducible.

Curtis Mayfield’s, Future Shock, is a classic funk track that just gets your head bobbin’ and your feet tappin’. The syncopated bass line and horn stabs give it quite a groove, while Mayfield delivers his socially-conscious message:

“We got to stop all men. From messing up the land, When won’t we understand. This is our last and only chance. Everybody, it’s a future shock.”

Well that’s it from me. Hope you enjoy the Shock Playlist, please let me know if you do and share it with your friends. See you next month.