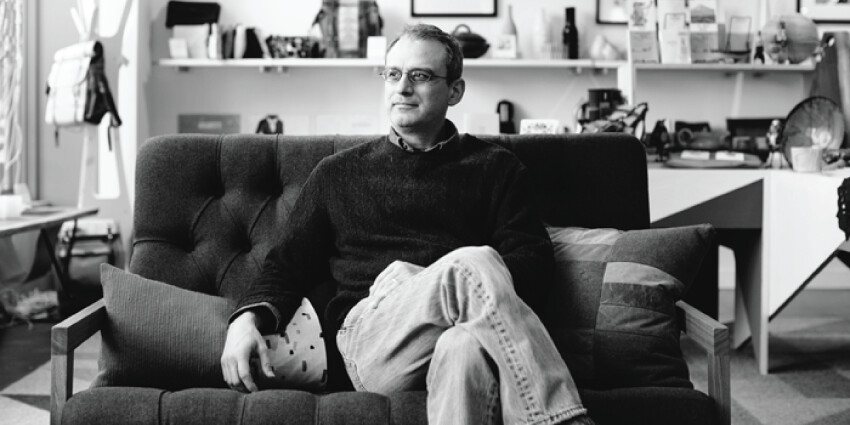 William Deresiewicz is an essayist and critic based in Portland. He gave a CreativeMornings talk in 2012 about the entrepreneurial ideal among creative millennials and in American society as a whole, based on his essay for the New York Times, Generation Sell. He recently published Excellent Sheep, a manifesto for people searching for the kind of insight on leading, thinking, and living that elite schools should be—but aren’t—providing.

You’ve been making the rounds at universities on your book tour. What’s the reception been like, given that your book takes the whole educational system to task?

The reception has been very positive, which, it may surprise you, doesn’t surprise me. I’ve been doing these talks for a bunch of years, and the pattern is always the same. Students show up—a lot of students, the rooms are invariably packed—with a certain amount of initial resistance. They’re a little skeptical, a little hostile, because they feel like I’m attacking them. But pretty soon they realize that I’m actually human, and that I see them as human, too. They figure out that I’m not attacking them at all; I’m attacking the system that they know as well as I do is deeply screwed up. They figure out, in other words, that I’m really on their side, and they’re grateful that I’m talking about all these elephants in the room that nobody else wants to acknowledge. Which is really why they’ve shown up in the first place. After the event at Brown, one of the administrators who had organized it said, “It was like a two-hour advising session.” Meaning, we had talked about exactly the kinds of things she had hoped we would: what college is supposed to be for, how you can get the most out of your education, how to think about your life-choices, etc.

The only exception, on the book tour, was Harvard. Apparently the institution found my argument so threatening that they had to line up a panel of deans and senior professors (five of them) to conduct a public bearbaiting. (The video link is here, if you want the gory details.) As a friend of mine put it, it turned out that I hadn’t touched a nerve, I had severed an artery. In the end, they just made themselves look like idiots, and they deprived their students of the chance to engage in some valuable (and clearly needed) self-reflection.

When you were writing the book, who were you hoping would be on the other end? Who is the ideal reader?

That’s an easy one. The best way to answer is by quoting the first few lines: “This book, in many ways, is a letter to my 20-year-old self. It talks about the kinds of things I wish that someone had encouraged me to think about when I was going to college—such as what the point of college might be in the first place.” My ideal reader is someone who just started college, or is about to start college, or is halfway through college, and needs some guidance (as most people do) about what the whole thing is supposed to be for. And I’m also writing for anyone who cares about that kind of kid: parents, especially parents of teenage children; teachers and principals; professors and deans; anyone who’s interested in education and educational reform (I hear from a lot of those kinds of people); anyone who’s been through the system (I hear from a lot of these kinds, too), who needs some catharsis/explanation/venting about what it did to them and what they can do to undo that.

What are your recommendations for the class of 2018?

Probably the best recommendation is to join the class of 2019. In other words, step back and take some time off: to slow down, to give yourself perspective, to break the cycle of incessant achievement, to get away from constant supervision, to see that there’s a world outside of school, to develop skills and explore capacities you haven’t had a chance to cultivate before. That can mean a gap year, if you haven’t started college, or a leave of absence if you have, but the way things work today, you don’t even necessarily need a leave of absence. Just take a summer off, for heaven’s sake. Don’t do an internship; don’t do a fellowship; don’t do anything to advance your career. Just go somewhere and breathe. You’ll be amazed at what you discover.

The larger point here is I that I don’t have any concrete solutions for people. You have to figure it out for yourself, and you have to start by discarding all the solutions other people (like your parents or guidance counselors or peers or society) have handed you. Which also means, the values. The reason that you need to step outside the system for a little while is so that you can start to listen to yourself.

The ideas in Generation Sell and your CreativeMornings talk stirred up a lot of discussion. Have those ideas matured into any new insights?

Actually, I’ve just published a piece in the Atlantic that’s based on a talk I gave at an MFA program here in Portland. I step back and look at the history of art and artists in the West and conjecture that we are in the early stages of a major shift. Instead of the solitary-genius model, which actually hasn’t existed for a while, or the professional model, which is what we’ve really had over the last half-century or so, we are now moving into the model of the artist as entrepreneur or entrepreneurial self. The point is that this shift, like the last ones, looks like it’s going to change everything about the way that art is done: training, practice, the shape of the artistic career, the nature of the artistic community, the way that artists see themselves and are seen by the public, the standards by which art is judged and the terms by which it is defined. It’s not even clear to me that capital-a Art, which didn’t exist as a concept before the late 18th century but which has been so central to the way that art has been understood and valued since (as a kind of secular religion, the expression of our spiritual life), will survive that shift. We’re all turning back into artisans, like we were in the Renaissance. Which, to me, is ultimately about the triumph of market values.

I love him! He writes so beautifully. The inside of his head must be terrible...