Creative because of our roots

Vivek Surti shares how his experience growing up in two cultures shaped him and his business.

As a first generation American, Vivek sometimes felt “torn between two cultures” - the American culture in which he lived and grew up, and Gujarati culture in which his family has deep roots and lived every day at home. Vivek shares how growing up in two cultures shaped him and how his roots were the inspiration for “Tailor,” a unique dining experience where the food is exceptional, but what is most important are the people in the room and the experience they have. 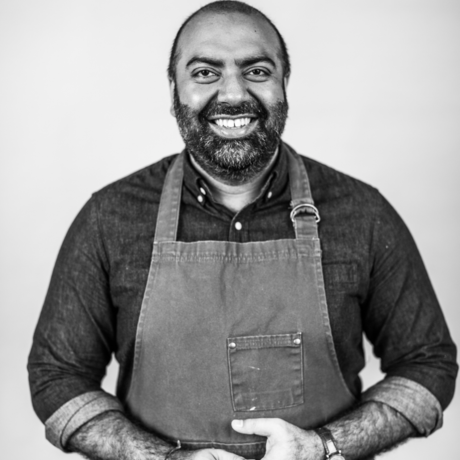 Vivek T. Surti is the culinary creator behind Tailor Nashville, the South Asian American restaurant opened in Germantown a year ago. Tailor was recently named as one of Bon Appetit magazine’s top 10 new restaurants in the country for 2019. And Thrillist said the same thing just a few days later!

Before Tailor, Vivek was busy hosting his very popular VEA Supper Club, Nashville’s first and longest-running series of pop up restaurants, which he created in May 2011. He hosted more than 100 sold out events as VEA Supper Club, at some of the coolest spots in town, including his parents’ home, Nashville Farmers’ Market, City House, Bastion, The 404 Kitchen, Biscuit Love, Hattie B’s, Butcher & Bee, Treehouse, and many more.

The dinners he hosts each night at Tailor, just like the VEA Supper Club dinners, have been compared to a dinner party - like going to a friend’s house who has a really cool kitchen, where great food, wine, and conversation never seem to end.

Vivek’s food point of view - South Asian American - reflects his heritage as a first generation American of Indian descent. Many of his dishes are representative of the Gujarati meals he grew up eating as a child, dishes that are American as well as dishes inspired by travel. His hospitality is served up as delightfully as the dishes he prepares, welcoming everyone around the table as if they are in his own home, and his tradition of telling relatable vignettes about each dish as a palate cleanser between courses at his supper club events will serve him well on the CM stage.