Steve Van Doren and Fara Howard talked about Vans past, present, and future at our heritage themed CreativeMornings. 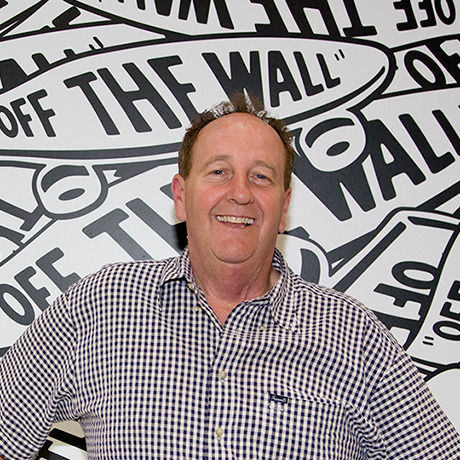 Steve started working for Vans at 10 years old and has never worked anywhere else in his life. As Vans’ vice president of events and promotions and unofficial ambassador of fun, Steve spends nearly 40 weeks a year on the road including a grueling non-stop stretch each summer traveling with 48-city musical sideshow, the Vans Warped Tour. At each and every stop around the globe, Steve makes it his personal mission to reach out and talk to as many people as he can, often while flipping them a burger or a hot dog on his ever-present grill. To understand the roots of Steve’s “constant motion” approach to life, one has to look no further than the history of Vans.

In 1966, the Van Doren Rubber Company opened for business in Anaheim, California, as a retail store with the factory attached in back. It was a family affair with Paul Van Doren and his brother, Jim, as principals along with spouses and a slew of kids pitching in manning the registers, running shoes to and from the stockroom and, eventually, painting and setting up the shiny new stores as they sprung up around Orange County.

From the start, Vans was an underdog company, but there was one thing that Paul Van Doren drove home with his kids: that to be successful, they had to be more passionate and work harder than their competitors. Vans didn’t have much of a budget to spend on advertising campaigns, so the Van Dorens came up with Vans’ first simple grassroots campaign: Tell a friend about Vans! The Van Dorens became fixtures at local county fairs and at the beach spreading the word about Vans’ affordable, quality footwear. In that first year, Vans opened 10 stores in 10 weeks and the word-of-mouth promotion was starting to take hold. Vans’ canvas shoes soon became a staple at the beach and on the feet of skaters throughout Southern California.

Steve was one of the young Van Dorens that spent his weekends passing out Vans stickers and fliers and chatting up the family business. The middle of five kids, Steve took to heart what Paul Van Doren preached about hard work and passion. Now almost 50 years later, a company that started off as a small, family business has evolved into a global action sports brand…most notably one with an uncanny emotional connection with its loyal customers. Much of that connection can be attributed to the passion for Vans and youth culture that Steve exudes to our employees and the people he meets each day.

Steve considers his job the best in the world. He loves being able to work with teens and witness the passionate lives they live. It is Steve’s passion to deliver the events they can enjoy. His father’s philosophy was that it was the people who made Vans special. That was true in 1966 and it still holds true today.